Close
Trending News
HomeSport‘I have the recipe to beat Khabib’: Michael Chandler says he has the skillset to DETHRONE undefeated UFC champion (VIDEO)

‘I have the recipe to beat Khabib’: Michael Chandler says he has the skillset to DETHRONE undefeated UFC champion (VIDEO)

‘I have the recipe to beat Khabib’: Michael Chandler says he has the skillset to DETHRONE undefeated UFC champion (VIDEO)

Michael Chandler says Khabib Nurmagomedov is deservedly viewed as the best lightweight on the planet, but believes he has the skills to dethrone the undefeated Russian and become the UFC lightweight champion.

Three-time Bellator lightweight champion Chandler signed with the UFC last month and was immediately installed as the backup fighter for the upcoming UFC 254 lightweight title fight between Khabib and Justin Gaethje, with the American set to step in as a replacement fighter should either man be forced out of the October 24 event on “UFC Fight Island” in Abu Dhabi.

Chatting to RT Sport from Yas Island, Chandler explained that his motivation throughout his career has always been to test himself against the very best fighter on the planet, and said that label belonged to Khabib.

“Back in the day it was Benson Henderson, Frankie Edgar, then all the way through the Rafael dos Anjos, Anthony Pettis, then into the Eddie (Alvarez) era, then the Conor (McGregor) era and now the Khabib era. I’ve been training to fight those guys since day one.

For Chandler to step in at UFC 254, it would mean either Khabib or Gaethje was rendered unable to fight. The former Bellator champion admitted that he understands how that scenario would be a disappointment for the fans and for the UFC, who would miss out on their chosen title matchup, but he also said he’d be ready to step in and take his opportunity with both hands if it happened.

“Either way, it’s hard to talk about this scenario without realizing that this is bad luck happening for the UFC with this main event falling off and me stepping in,” he said.

“But, if I had it my way, if a fighter does pull out, I would like for it to be Gaethje, so I can fight Khabib and be the number one lightweight in the world on the night of October 24.”

Chandler admitted that he has followed Khabib’s career closely, and said that he’s been preparing to face him for the last few years. And he said that Khabib’s style won’t present any surprises, and that he believes he has the combination of skills to effectively combat the Russian star’s dominant ground game.

“I’ve always been interested in Khabib Nurmagomedov as an athlete,” he explained.

“He’s always been a guy I’ve had my eye on. He’s a guy that I’ve at times emulated and tried to pull things from his style. And he’s also a guy that I’ve trained for, for the last three, four, five, six years. I need to have my game in a place where I can beat that guy, and now I possibly get that opportunity.

“I’ve always admired his style. He has a very ground-game-dominant style. He lets it be known exactly what his style is gonna be. He’s gonna come forward, he’s gonna put pressure on you. He’s gonna push you up against the cage, he’s gonna pick you up and put you down and he’s gonna hold you there for 25 minutes if you let him, or until gonna get the finish.

Now Chandler, who was considered one of the world’s best lightweights outside of the UFC, finds himself right in the thick of the UFC’s 155-pound title picture, and he said he’s ready to transition from newcomer to champion in quick order, and vowed to win the title within the next 12 months.

“I immediately went from outsider to insider to dark horse to champion in the next 12 months,” he said.

“That’s what I’m going to do, and whether I have to beat Khabib, or I beat Gaethje, or I beat someone else, I will be UFC lightweight champion in the next year.” 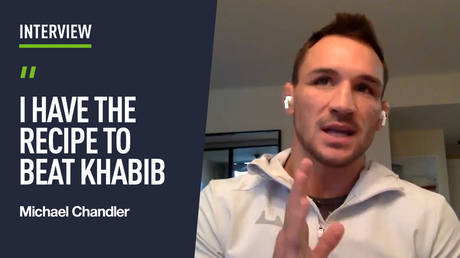