‘I got greedy’: Comical scenes as golf Hulk DeChambeau implodes at Masters despite stars’ doomed search for wild shot (VIDEO)

‘I got greedy’: Comical scenes as golf Hulk DeChambeau implodes at Masters despite stars’ doomed search for wild shot (VIDEO)

Strongman Bryson DeChambeau’s attempt to power his way to contention at the Masters has begun so badly that the pre-tournament favorite is at risk of missing the halfway cut, forcing him to re-tee after losing his ball in bogland.

One of DeChambeau’s hallmark huge drives backfired at the third at the Augusta showpiece, where he pulled a shot left of the target, sending it into a boggy area in the first cut.

Playing partners Jon Rahm and Louis Oosthuizen launched a desperate search for the shot but failed to retrieve the ball within the allocated three minutes, meaning despondent DeChambeau had to be carted back to the tee.

The man who has become as renowned for his on-course tantrums as his bulked-up figure this year endured further misery as he bogeyed the next two holes, although he resisted the temptation to show his frustration and managed a respectable end to the day to record a one over scorecard that was commendable in the circumstances.

Q: Were you involved in the search for Bryson’s ball at all?

Many fans responded with mocking memes and cruel jibes on social media towards DeChambeau, who is not known for his popularity or humility on the tour.

“I know they found it afterwards but we must have been close,” said Rahm, who some viewers suggested had been quietly delighted at his rivals’ predicament, having initially asked reporters which ball they were referring to when they asked about DeChambeau’s calamities.

“I mean, when you have Bryson hitting it as hard as he hits it, it’s kind of hooking with not much spin into a soft area.

“We were all confident it was pretty buried and it was going to be hard to find.

That’s the thing about golf. Just when you think you’ve figured it out, you’re humbled all over again.

@BarstoolBigCat you love to see it

“It’s unfortunate that the rules of golf don’t let you kind of figure out it’s somewhere there and keep playing.

“He had to re‑tee and I know that affected him a little bit because he didn’t play his best golf after that. But he’s a fighter and he’s showing it.”

Beefy DeChambeau raged at a cameraman for filming him on a course earlier this year and irritated fans by pushing for a free drop at another tournament, farcically claiming that his shot had fallen near fire ants and was irretrievable.

“I got greedy,” he admitted. “This golf course, as much as I’m trying to attack it, it can bite back.

Rahm (amongst others) haaaaaates Bryson! It’s so great.

“It’s still Augusta National, the Masters. It’s an amazing test of golf, no matter what way you play it.

“I tried to take on some risks today. It didn’t work out as well as I thought it would but I’m proud of the way I handled myself.”

Commentators warned that DeChambeau’s physical strength alone would not work to his advantage.

“You have to be so careful with how you plot your way around,” said one analyst for Sky Sports, pointing out that six-time Masters winner Jack Nicklaus and five-time champion Tiger Woods had succeeded because of their canniness on the course. “You have to temper the aggression.” 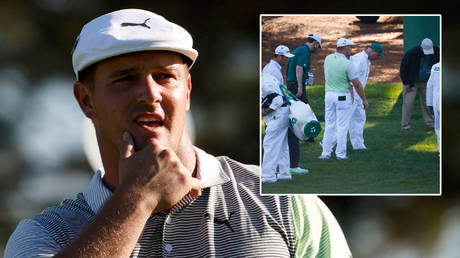 New petrol and diesel cars will be...