Close
Trending News
HomeSport‘I find it DISGUSTING’: Heartthrob who was compared to BRAD PITT at World Cup in Russia says fans sent requests for his SPERM

‘I find it DISGUSTING’: Heartthrob who was compared to BRAD PITT at World Cup in Russia says fans sent requests for his SPERM

‘I find it DISGUSTING’: Heartthrob who was compared to BRAD PITT at World Cup in Russia says fans sent requests for his SPERM

Midfielder Rurik Gislason, who earned a vast Instagram following after being called the best-looking star at the 2018 World Cup, has said he feels like a “bad guy” for discussing fame and has revealed that fans ask for his sperm.

Gislason might have expected his reputation to rise when he came on for 27 minutes to help Iceland keep Lionel Messi at bay in a 1-1 draw with Argentina in their opening game, but the relatively unknown substitute was shocked when his Instagram following rocketed by more than 250,000 as fans noticed his smouldering looks.

After being compared to Hollywood hunk Brad Pitt in the media, Gislason fled to the US to try to take a break from incessant attention on social media, including bizarre requests from some of his new followers.

“I came in after the game and went to check my phone,” free agent Rurik told Visir. “There were a lot of all kinds of messages and requests, including whether I would be willing to donate my sperm.

“A lot of people who are on Instagram are very open because they are behind their phone.

“I find it hard to talk about without sounding like an a**hole. It’s disgustingly difficult to talk about. I always see myself as a bad guy when I talk about it.

“We went to Miami after the World Cup and I had to be photographed everywhere. It was special to be outside Iceland and to have some kind of stardom.”

Rurik said he is still frequently contacted by modeling agencies and fans, proving particularly popular in Russia and Argentina.

When he went on holiday to Brazil, he realized that fans who recognized him had gathered outside his hotel in search of photos and autographs.

The 32-year-old, who runs his own clothing label and gin production line, had more than 1.2 million followers at the peak of the clamour, still boasting an audience of more than 819,000 on the platform two years later.

“It was a very interesting time in my life,” he said.

“The numbers went down when I started posting pictures of my girlfriend. I do not know why.”

Rurik spent two years with English club Charlton while they were in the Premier League but failed to make an appearance before turning out for three Danish sides including FC Copenhagen and, more recently, German clubs FC Nurnberg and SV Sandhausen.

He has now returned to Iceland and is pondering his next career move. 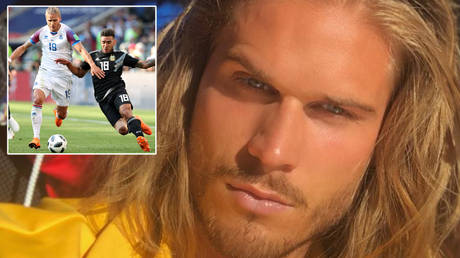