A month after filming himself rubbing oil into his model girlfriend’s behind before slapping it on a sun lounger, Conor McGregor accomplice Dillon Danis has claimed that his weight increase is down to his taste for her posterior.

World-class grappler and long-term McGregor teammate Danis sat next to the backside of girlfriend Savannah Montano, an Instagram model and YouTuber who regularly posts similar scantily-clad shots to her social media following of more than 1.8 million.

Montano, who Danis has called the “baddest b*tch on the planet,” also posted the saucy photo on her platform.

“People ask why I gained some weight during quarantine,” quipped 26-year-old Danis. “It’s because I eat a** for breakfast, lunch and dinner.”

Montano responded to Danis’s post by adding “t*tties for a snack” while fans accused her of removing photos of him from her account to avoid alienating her male fanbase.

Danis had wished McGregor happy birthday in a photo of the pair on a private plane before his latest shot bragging about Montano’s figure.

“Hate me all you want,” he told his following of almost a million when the couple posed in front of a Rolls-Royce car last year.

Montano filmed Danis kissing her as they relaxed half-naked at an apartment in New York in June, when she admitted that the middleweight was “kicking me out” to prepare for his fight with Max Humphrey.

Real fans want to see you scrap, not eat ass. Get your priorities straight son. You gonna be remembered as a social media marketer or an MMA fighter?

She then watched as he won the second professional bout of his career at Bellator 222 at Madison Square Garden, enhancing his perfect early record.

Danis has already called himself “the don of New York City” and likened himself to The Sopranos lead character Tony Soprano on social media this month, as well as publishing a photo of former Bellator champion Ben Askren while asking: “This guy slaps your girl’s a** at the club – what’s your next move?”

One fan replied to his latest provocative post by telling Danis: “Real fans want to see you scrap, not eat a**.

“Get your priorities straight, son. Are you going to be remembered as a social media marketer or an MMA fighter?”

i’d hate me too. pic.twitter.com/LbXJB5xzR8

Former UFC title holder Michael Bisping has previously described Danis as a man desperate to impersonate McGregor, with whom he was part of an unsavoury scrap that spilled outside the ring in the aftermath of the ex-champion’s defeat to Khabib Nurmagomedov in 2018.

“Not only is he Conor McGregor’s jiu-jitsu coach, he’s seeming to try to morph and copy McGregor’s antics,” Bisping observed. “Certainly his clothing.

“Conor does wear some f*cking really nice, cool sh*t and Dillon Danis is like the poor, second-hand, overwashed, hand-me-down version because his clothes are f*cking terrible.

“He’s trying to be Conor so hard. It’s laughable.” 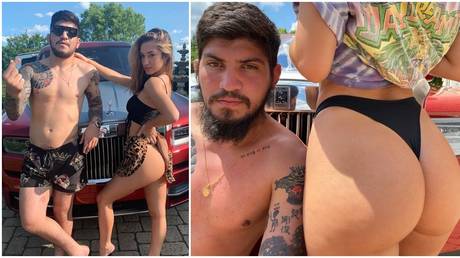