Manchester City star Kevin De Bruyne said he isn’t bothered one way or another whether Barcelona’s Lionel Messi signs for the club.

Messi was linked with a move to the Etihad Stadium in the summer after he put in a transfer request at the Camp Nou, before he ultimately stayed in Barcelona.

De Bruyne said of the prospect of Messi making the switch, “I don’t really care, to be honest. If he comes, it’s a good thing, if he doesn’t there is enough good players at the club who I enjoy playing with, so that is not for now.”

De Bruyne’s comments come after City’s chief operating officer Omar Berrada said the club would be open to recruiting the Argentinian next summer when his contract at Barca expires.

“I think any club in the world would like to explore the possibility of him joining their team,” Berrada said.

“The fact that it was commented that he wanted to come to play for City just shows you how far the team has come over the last years where the best talent of his generation and potentially saying he wants to come and play for us.”

“It’s hard to guess what could happen. If you think back to those two weeks where everything played out at Barcelona, it’s almost impossible to guess what will happen next summer.

“Messi is a generational talent, he’s the best player in the world and probably an exception to potential investments that we’d do out of the ordinary but our planning has been done with this current squad and it is being considered with the current opportunities that we have.”

Messi may turn 34 at the end of this season, but it will come as no surprise if there’s a scramble for his signature next summer should he leave Barcelona after 21 years at the club.

The forward boasts an astonishing record of 635 goals and 279 assists for the Catalan giants, helping to win 34 trophies at the Camp Nou.

He’d be well-suited to City’s style of play, too, having worked with manager Pep Guardiola between 2008 and 2012.

The pair won 14 honors together in that time, including three La Liga titles and two UEFA Champions League titles.

Messi’s twilight years have been spent acting both as Barcelona’s chief goalscorer and creator, but with the likes of De Bruyne, Sergio Aguero and Raheem Sterling around him at the Etihad, the burden on him would be eased considerably.

As such, the prospect of spending his final years continuing to challenge for major silverware with such support around him would likely hold considerable appeal, and even at his age he’d still be able to significantly enhance City’s already stacked squad. 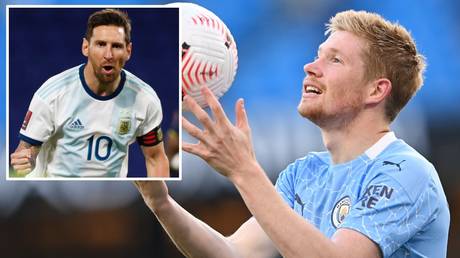