‘I don’t know why, but I just can’t delete it’: Michael Jordan reveals he treasures final text message exchange with Kobe Bryant

‘I don’t know why, but I just can’t delete it’: Michael Jordan reveals he treasures final text message exchange with Kobe Bryant

Basketball icon Michael Jordan has revealed that he can’t bring himself to delete the final text exchange he had with Kobe Bryant prior to the former LA Lakers star’s death in a helicopter accident last year.

Jordan, who is considered to be the greatest basketball player in history, was a close friend of Bryant’s, whom many considered to be Jordan’s heir apparent throughout his two-decade NBA career.

The two stars of the sport, who between them gathered an incredible 11 NBA titles as they both rose to legendary status in their respective teams, maintained a close friendship and were in regular contact – and Jordan has told ESPN that he treasures the final exchange he had with Bryant which occurred less than two months before his death.

“He was just so happy,” Jordan says of the person he described as his ‘little brother’. “He was doing so well.”

Bryant’s last text message to Jordan, he says, is bittersweet and reminds him of his competitive spirit but also serves as a powerful reminder of what was lost when a helicopter carrying him, his young daughter and several others crashed into the side of a mountain in Calablasas, California in January 2020.

“This tequila is awesome,” texted Bryant to Jordan, referring to Jordan’s Jordan’s Cincoro Tequila of which Jordan had sent to him, just after noon on December 8, 2019.

“Thank you, my brother,” came the reply.

Jordan indicated that the message was in relation to Bryant’s role in coaching the team in which his daughter, Gianna, played. She too died in the crash.

“I just love that text because it shows Kobe’s competitive nature,” Jordan explained of the final message he would ever receive from Bryant.

The exchange is just one monument which Jordan has to remember his friend, peer and successor, along with sharing practically every accolade on offer by the NBA.

But this particular reminder of Bryant is perhaps among his most treasured. 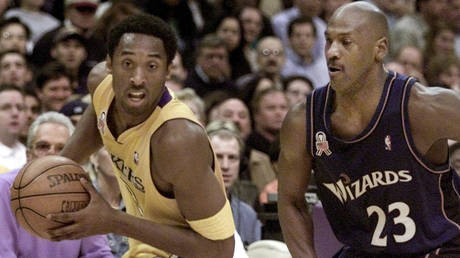