Close
Trending News
HomeSport‘I don’t know what will happen’: Russian football ace says US team AXED him after he chose not to take knee for Black Lives Matter

‘I don’t know what will happen’: Russian football ace says US team AXED him after he chose not to take knee for Black Lives Matter

‘I don’t know what will happen’: Russian football ace says US team AXED him after he chose not to take knee for Black Lives Matter

Russian-American footballer Valeri Saramutin has revealed that he was abruptly dropped by US team Austin Bold and is in limbo after failing to take a knee, losing his place in what he believes was a punishment over his decision.

Former Russia youth international Saramutin claimed figures at the highest level of the club, which plays in the division below Major League Soccer, first voiced concerns to him when he decided not to join his teammates in taking a knee in the summer.

Newcomers Bold had performed the gesture in their first match back after football was suspended during the pandemic, joining the worldwide trend amid widespread social unrest across the US in the aftermath of the killing of George Floyd at the hands of police brutality.

“I did not kneel and the club had questions for me,” the 25-year-old midfielder told Sport Express. “The coach said that I need to think about my behavior.

From Russia with Love.

“I also had a conversation with the president – a white man – who urged me: ‘Understand, this is not for you – this is a show of respect.’ I answered that I did not understand why this should be done.

“I am fine with what is happening in America but I think, in the summer, this situation began to be exaggerated. Before the matches, everyone would kneel down, [which would be] OK if it was optional.”

Saramutin said that club vice-captain Jermaine Taylor, who won 99 caps for Jamaica, had privately offered him support and unsuccessfully “tried to convince the management”.

Bold had asked the squad to take paycuts earlier in the year, and Saramutin speculated that the decision by the majority of players to reject a reduction had begun a “deterioration of relations” between the players and the leadership team.

“The whole team was offered to cut their salaries by half, but only five agreed,” he explained. “Older players who had already earned their own money in other clubs. I, like most, refused, because I think it is wrong.”

Saramutin was born in New Jersey and moved to Austin in 2019 after starting out at Dynamo Moscow, where he played in the Russian Premier League, also having brief spells with Dynamo St. Petersburg and Veles Moscow.

He missed the only game he could have played in before quarantine through injury and followed the club’s training program during lockdown while keeping in touch with his father and sister in New York.

He was forced to quarantine for two weeks shortly after the initial issue over the Black Lives Matter protest because a teammate who he lived with tested positive, but his three appearances as a substitute have proved to be his final appearances for the club in his career so far.

In the same month as teams performed a protest in which Saramutin said teams had knelt for 46 seconds in the eighth minute of matches – reflecting Floyd’s reported eight-minutes-and-46-seconds struggle with police – the midfielder experienced more conflict after he chose not to kneel before a match against Oklahoma.

Saramutin alleged that he had watched on as club captain Kleber rowed angrily with bosses in the locker room over being replaced, having also decided not to perform the gesture.

“Kleber was immediately suspended from games and training, although the contract had not yet been broken off – he is in the lineup on the official website,” claimed Saramutin, who said he was the only player to have supported Kleber and had been able to talk to him in Russian because of the Brazilian’s five years with Dynamo Kiev.

“I was also suspended after that game, but only from matches. I continued to go to training…[they] talked to me as if nothing had happened.

“No fines were issued – the coach explained to me that I was not physically ready to play. But that was nonsense: around the same time, Bold signed a player who had not played for about a year, and he immediately began to get into the squad.”

Saramutin returned to Russia after the USL season ended last month and still has a contract with Bold, although the situation has been further complicated by a lack of clarity over when next season will start.

“I hope that everything will be settled in December. I’m not ready for another year just to train without playing games.” 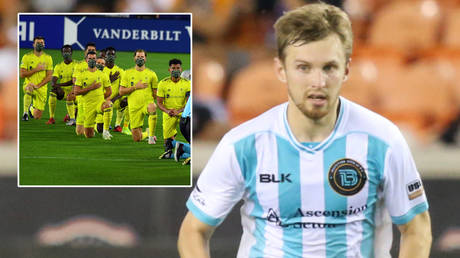