Close
Trending News
HomeSport‘I don’t know if I have to convince him’: New Barca boss Koeman says ‘decisions need to be made’ but is ‘hopeful’ Messi stays

‘I don’t know if I have to convince him’: New Barca boss Koeman says ‘decisions need to be made’ but is ‘hopeful’ Messi stays

‘I don’t know if I have to convince him’: New Barca boss Koeman says ‘decisions need to be made’ but is ‘hopeful’ Messi stays

Newly-appointed Barcelona boss Ronald Koeman has laid bare his admiration for Lionel Messi in his first press conference with his new team and says he is optimistic that the Argentinian maestro will opt to stay with the club.

For the first time in his Barcelona career, substantive reports have linked Messi with a move away from the club he has represented since he was a boy, suggesting that the player regarded by many as the world’s best may decide to end his association with the club.

Reports of internal rancor within the Barca ranks came to a head this week amid a cull of backroom staff which ended Quique Setien’s brief reign in charge at a club whose pride has taken a huge hit following their stunning 8-2 Champions League reverse to Bayern Munich.

But Koeman, the man who will take Setien’s place in the Camp Nou dugout, says he is looking forward to working with Messi for many years to come.

“I don’t know if I have to convince Messi,” Koeman said of the six-time Ballon d’Or winner. “I don’t know if it’s a yes or a no. Messi is the best player in the world and you want him on your team, not on your opponent’s.

Messi’s status at Barcelona remains unresolved for now but should rumors of his imminent departure be true, it would immediately make him one of the hottest properties the transfer market has seen in some time.

His contract demands alone would limit his available options but logic dictates that teams with sufficiently deep pockets like Paris Saint-Germain and Manchester City wouldn’t require much convincing to sanction an offer.

For now though, Koeman says he hopes to keep the situation close to his chest.

“These are private things between a coach and a player,” he added. “I want to know what he Messi thinks. And then it’s up to me to take decisions. But, again, Messi has a year’s contract. But he’s such an important player that any team would want him.”

And with Barcelona president Josep Maria Bartomeu also announcing this week that he was bringing forward the club’s presidential elections to March 2021, the prospect of losing the greatest player to have ever represented the club – in an election year to boot – is an unthinkable gamble.

“His father told me that there was a strong disappointment,” Bartomeu said of the situation. “This is correct, but since Sunday we have to think about the future. It’s about changing the mentality.

“He has a contract until 2021. I talk to him regularly and he knows there’s a project with a new coach here. We’re all disappointed at the moment, but we’re motivated by the new project.” 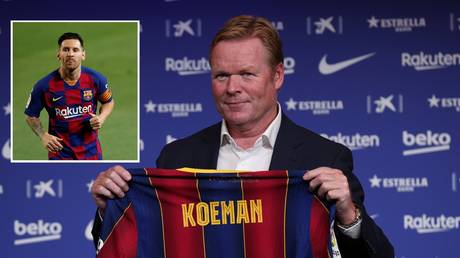 Earliest artwork EVER made on Brit...

Washington dangles aid offer for b...