‘I don’t know if he’s got the moral strength’: Davydenko on chances of ATP king Medvedev making Grand Slam breakthrough

‘I don’t know if he’s got the moral strength’: Davydenko on chances of ATP king Medvedev making Grand Slam breakthrough

Daniil Medvedev became the second Russian ever to be crowned ATP Finals champion on Sunday but the first man to achieve that accolade, Nikolay Davydenko, is unsure if Medvedev is yet ready to make the step to win a Grand Slam.

Medvedev battled back brilliantly to defeat Austrian world number three Dominic Thiem in three sets at the O2 Arena in London, earning the 24-year-old Russian his biggest title to date.

There was a sense of symmetry to the victory as Medvedev became the last winner in London before the ATP Finals move to Turin in Italy next year, ending a 12-year stay in the UK capital.

The first winner when the event arrived in London was Davydenko, who before Medvedev’s victory on Sunday had remained the sole Russian winner of the 50-year-old season-ending showpiece.

Commenting on his countryman’s win, Davydenko praised Medvedev’s “tactical flexibility” in overcoming Thiem in a battle which lasted 2 hours 43 minutes.

“Medvedev was tactically flexible. With his trainer they used different tactical moments of playing with different players,” said the former world number three.

“As it turned out, it worked out with Thiem with one set of tactics, and in the semi-final with [Rafael] Nadal it worked out [with different tactics]. He implemented everything that he needed to.”

Medvedev made history in London by beating each of the world’s current top three on his way to the title – the only person ever to achieve that feat.

Logically attention will now turn to whether Medvedev can replicate that success at a best-of-five-set Grand Slam.

The Russian’s best performance at a Slam to date is his appearance in the final of US Open in 2019, when he went down to Rafael Nadal in a five-set thriller.

Davydenko suggested that while the 6ft 6in Medvedev is physically up to the task, mentally he still may not quite be ready to overcome the very best.

“It seems to me that now Medvedev is already ready for this. Physically he’s ready, but I don’t know if he has enough moral strength to maintain concentration,” Davydenko added.

Despite those comments, Medvedev has appeared a much calmer and more focused presence on court in recent months.

Formerly known for outbursts of temper – including on his way to the final at Flushing Meadows, when he waged a running war with the New York crowd – Medvedev now seems much more composed.

The Russian world number four barely celebrated on court after seeing off Thiem, later explaining that low-key reactions to victory were now “his thing.”

“In tennis I think I probably am the first one, definitely in football I have seen players who do not celebrate,” Medvedev explained.

“I decided during the US Open when I had tough time with the crowd. I don’t celebrate my victories. That is my thing and I like it.” 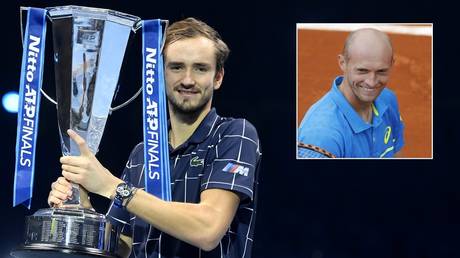