‘I don’t know how I mistyped’: NBA announcer suspended after tweeting N-word during game, says he meant to type ‘Nuggets’

‘I don’t know how I mistyped’: NBA announcer suspended after tweeting N-word during game, says he meant to type ‘Nuggets’

John Focke, announcer for NBA team the Charlotte Hornets, has issued an apology after tweeting out a racial slur during a game this week, claiming the incident was little more than an accidental typo.

Focke was watching a broadcast of Monday’s game between the Utah Jazz and the Denver Nuggets when he took to social media, as he claims, to highlight the excellent shooting on display during the game – but attracted a wave of criticism for the errant use of a racial phrase.

“Shot making in this Jazz-(n-word) game is awesome!” Focke wrote to his more than 3,800 followers. “Murray and Mitchell going back and forth what a game!“

After noticing his error, Focke swiftly deleted the tweet and issued another missive clarifying the controversial post.

“Earlier today I made a horrific error while attempting to tweet about the Denver-Utah game,” he wrote.

“I don’t know how I mistyped, I had (and have) no intention of ever using that word.

“I take full responsibility for my actions. I have been sick to my stomach about it ever since. I’m truly sorry that this happened and I apologize to those I offended.”

The Hornets acted quickly following Focke’s initial tweet, suspending him indefinitely from team affairs and launching an internal investigation into the incident.

“The Charlotte Hornets are aware of the recent social media post by radio broadcaster John Focke,” they said in a statement. “As an organization, we do not condone this type of language.

“John has been suspended indefinitely as we investigate the matter more closely.“

There is as of yet no indication as to when – or if – Focke’s suspension will be lifted, but the timing of the incident (which took place in Focke’s debut season with the team) which coincides with the wave of ‘Black Lives Matter’ protests in sport can justifiably be seen as a public relations black eye for the team. 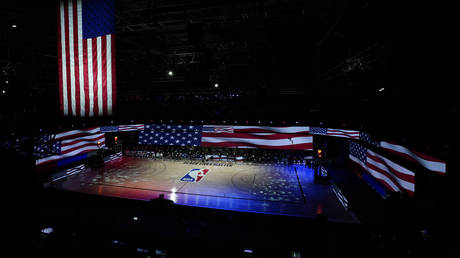 ‘I feel even more feminine’: Biath...