Close
Trending News
HomeSport‘I did the RIGHT thing’: UFC coach defends decision to push fighter to continue despite him begging to quit NINE TIMES during bout

‘I did the RIGHT thing’: UFC coach defends decision to push fighter to continue despite him begging to quit NINE TIMES during bout

‘I did the RIGHT thing’: UFC coach defends decision to push fighter to continue despite him begging to quit NINE TIMES during bout

UFC trainer Robert Drysdale has insisted he “did the right thing” by refusing to throw in the towel for his charge Max Rohskopf at UFC on ESPN 11, despite the despondent fighter declaring several times he wanted to quit.

UFC debutant Rohskopf, who stepped up on five days’ notice, tasted defeat for the first time in his career when quitting against Austin Hubbard on the cusp of the third and final round of their lightweight bout at the UFC’s Apex facility in Las Vegas.

As seen by viewers around the world, Drysdale and Rohskopf were involved in a tense back-and-forth during the one-minute rest period, with the latter continually demanding that his coach “call it” and inform the referee that he had had enough.

Inside the corner of Max Rohskopf before the fight is called off at #UFCVegas3 pic.twitter.com/hZrfnaMObt

Drysdale controversially declined the request, but just as Rohskopf was getting to his feet, an official who had overheard the exchange asked for and received confirmation of the 25-year-old’s wishes, meaning Hubbard was therefore handed the win.

However, Drysdale later defended his actions, insisting he hasn’t changed his stance and is convinced he “did the right thing.”

“I’d do it again,” Drysdale said, according to MMA Fighting. “If I could change one thing, I would have insisted more because he wasn’t hurt.

“The coach’s job is to take the athlete to the extreme technically, physically and mentally. I think he lost his head there. He got tired and his head got weak.”

“I want what’s best for him, I worry about him, and it’s my obligation to give him a mental push. ‘Brother, don’t give up, you won’t give up.’ I do that every day in the gym.

“He’s tired and I say, ‘One more round.’ That’s my job. If I’m there, and I let the guy quit on the first adversity, I’m not doing my job right,” Drysdale continued.

Himself a former UFC fighter, Drysdale said he was unconcerned by the backlash.

“People will talk, let them talk, but I’m not wrong… He took the fight on five days’ notice knowing that his cardio wasn’t there, he lost to his cardio, that’s when the loss started.

“The fight was even, it’s not like he was getting beat up. He won the first round and lost the second, he wasn’t getting beat up. He could have returned to the third with his head in the right place, with the right strategy, the one I was trying to give him, and we would win the decision.”

The Nevada State Athletic Commission will reportedly investigate the end of the bout, although in a subsequent video statement on Instagram Drysdale again defended his actions while asserting that: “If you pay close attention, I did call the fight at the very last second. I did the right thing. I exhausted the 60 seconds and at the very last second, I called it.” 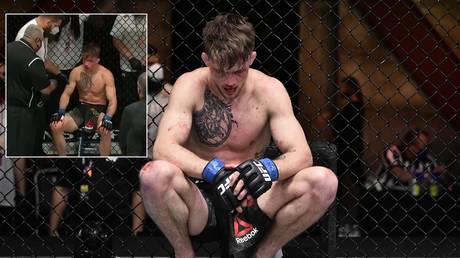