New Barcelona coach Ronald Koeman has shut down complaints from Antoine Griezmann after the French international suggested to the media the Dutchman doesn’t know how to best utilize him in his starting eleven.

Griezmann, 29, has started all three of Barcelona’s opening La Liga fixtures on the right side of a trio of attackers but was deployed in a central role by France manager Didier Deschamps during the international break, where he scored during Wednesday’s 2-1 win against Croatia.

Speaking to the media after the game, the World Cup winner said that he enjoyed the freedom he receives in the French lineup because Deschamps “plays me in my best position.”

The Catalan press subsequently seized on the comments as a rebuke of Koeman’s tactics but speaking at a press conference in advance of Barcelona’s game with Getafe on Saturday evening, Koeman said that he had “no problem” with Griezmann’s comments – but also reminded the player exactly who it is that picks the team.

“I spoke with Antoine [on Thursday] and I told him I’m looking out for the best for the team and I think he’s best on the right for us,” Koeman told ESPN.

“He can play in three positions. He could also play as a No. 10 or a No. 9. In fact, when I was the Dutch coach, in a game against France, he played on the right.

“I have no problem with Antoine. I can only play one No. 9, one No. 10, one No. 7 etc. I don’t play players out of position. Griezmann can play wide coming inside on his left foot. If he has another position that he likes more, that’s how it is, but we can’t have 10 players in the No. 10 role.

“I decide based on what’s best for the team. The coach is in charge and the players must be at their best when they play.”

Griezmann, a big-money import from rivals Atletico Madrid in the summer of 2019, hasn’t yet found the net for Barcelona this season – with Koeman singling him out for criticism after he spurned a pair of goalscoring opportunities in Barca’s draw with Sevilla earlier this month.

Koeman has reportedly impressed several members of the Barcelona squad, including Lionel Messi, since taking charge at the club following the departure of Quique Setien – with his demand for effort on the training ground said to have earned him the nickname “Sergeant Koeman.” 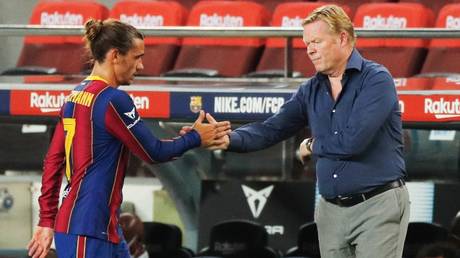