‘I could have ended up in prison, now I fight for money’: Newly-crowned UFC champ Petr Yan on path to glory & future plans (VIDEO)

‘I could have ended up in prison, now I fight for money’: Newly-crowned UFC champ Petr Yan on path to glory & future plans (VIDEO)

Russian bantamweight Petr Yan says he will not seek the spotlight or popularity despite being propelled to further fame by defeating Brazilian MMA legend Jose Aldo to claim the UFC championship belt on Fight Island.

Yan, 27, completed a remarkable rise to the summit of his sport by finishing veteran star Aldo in the fifth round of their contest at UFC 251 in Abu Dhabi last weekend, earning a seventh straight win since making his debut with the promotion.

The victory saw the Siberian become Russia’s second current UFC title holder – after undefeated lightweight champion Khabib Nurmagomedov – and has boosted Yan’s profile in his homeland and far beyond.

But despite the added attention that comes with possessing UFC gold, Yan told RT Sport on ‘Fight Island’ that he will not seek out further fame and remains very much focused on his fighting.

“The media ask a lot of questions but I try to be selective. I don’t want to talk to people who didn’t talk to me before. All these different TV channels and outlets keep appearing. I don’t need popularity,” Yan said of his newfound status.

“I’ll talk to the people who paid attention to me when I was starting with the UFC when I have free time, no problem. Otherwise, I’m not interested.

“Of course there are more responsibilities [as champion], but I’ll stay focused. I understand I have to defend the title, there’s still work to do… I’ll try to manage everything properly and remember that I’m a professional athlete.”

Yan was given a hero’s welcome on his return to Ekaterinburg in Siberia, and can expect a lot more attention to head his way in the coming weeks and months.

The fighter bearing the name ‘No Mercy’ says he is willing to help use his profile to embark on a limited victory tour in his homeland, but with the purpose of motivating others.

“In Russia, yes [I would go on a tour], but not other countries. I’m not sure when I’ll have time to do it, but I want to go to the cities where I trained.

“I don’t need TV appearances or big crowds, I want to be around the youth, my friends, people who truly know me – anyone I can motivate, that’s important to me, but when they start writing all that ‘do you remember this’ nonsense, I don’t like that.”

Yan dominated 33-year-old Brazilian veteran Aldo in a fight that many felt should have been stopped sooner.

The Russian himself dismissed any notion that it had been a straightforward victory, citing the circumstances of the bout at a location the UFC has put together amid the Covid-19 pandemic.

“Aldo and I have nothing but respect for each other,” Yan said.

“After the fight we shook hands and exchanged some words with him and his trainer. I think highly of him. It was a tough fight, I said that it would be going in. I knew he came into my weight division to take what’s mine. If I show any mental weakness, I’ll get rolled over. So I have to hold my own.

“It was the toughest fight of my career given the circumstances and the fact it was a UFC title fight. That adds pressure and responsibility. I have responsibilities to my team, to the guys who are with me.”

Breaking down the fight, Yan said he had signaled his intent early on, but had still been forced to think on his feet due to Aldo’s persistent shin kicks.

“In the first round, he bent over and screamed when I hit him in the liver. I kept hitting him. The round was almost over. I think it was good that I didn’t go too hard on him because the referee was patient, he would have let Aldo take it,” he said.

“As for the 2nd round, I missed a lot of punches and took low kicks to the shins. That’s something I missed during training. I knew that Aldo likes low kicks to the hips, but my trainer and I didn’t prepare for kicks to the shins. I gave him an opening but he kept kicking my shins and it was really unpleasant. But it was a good learning experience, next time I’ll know that I need to pay attention to everything.”

Yan’s preparations for the Aldo bout were partly disrupted by a night-time visit from USADA anti-doping officials, which he said was far from ideal.

“I don’t think it was justified since we were adjusting to US time. We tried to sleep early because we had to get up at 4am, by 4:50 we were driving to the arena. USADA came and woke me up, then we waited for the test results.

“It was very unpleasant because they can easily test you at the arena. I think that’s something USADA and the UFC didn’t think through,” Yan said.

That distraction aside, Yan praised the infrastructure on Yas Island, where UFC boss Dana White has masterminded a series of cards to cater to international fighters in particular as uncertainty over Covid-19 rages on elsewhere.

“The infrastructure and overall organization is great. They wake you up, get you where you need to be,” he said.

“After weighing in you don’t think about what you’ll eat or drink. They give you a clear structured program – these are your electrolytes, your amino acids. I like how everything is organized.

“As for Covid-19 testing – I don’t think it’s excessive. I think it’s best to protect everyone than to overlook anything. There are masks everywhere, hand sanitizers, and tests. There are no outsiders here because nobody can enter or leave, they blocked the roads.”

One man Yan bumped into on Fight Island was former rival Urijah Faber, whom he steamrollered in his previous fight on his way to the showdown with Aldo.

Yan admitted that the pair had chatted about some potential rivals who could be in the frame further down the line in what is now an impressively stacked 135lbs division for the UFC.

“I met Urijah by the pool. He came to corner one of his guys. We had a good chat about the fight. He congratulated me on my victory… We talked about Cody Garbrandt, T.J. Dillashaw, Henry Cejudo, that sort of thing.”

While Yan now has the belt vacated by the retired Cejudo, the pair have continued to trade barbs following his success.

The man widely tipped as next up for Yan is US fighter Aljamain Sterling, who looked impressive in seeing off fellow contender Cory Sandhagen in his last octagon outing, and who is on a five-fight hot streak.

Yan admitted he would be a marked man now that he has the bantamweight strap, and while he said his focus was very much on the division, he hinted he could at some point be tempted by a move up to featherweight.

“I’d probably go up in weight not because I weigh a lot… I can go down if I want to, but I’m not interested in that. I’m more interested in testing myself against stronger and bigger opponents,” said the Siberian.

“There are technical and psychological factors at play and I can test that against stronger guys. People are starting to work with me now. They’re the ones who need it now. I have the belt, and they want it. So now they’ll run around talking and we’ll see later on who said what and make decisions based on that.”

When asked what he credits his success to, and whether it has anything to do with hailing from a hardened Siberian background, Yan replied that it could play a role – also admitting that he could have gone down a very different and much less desirable path.

“It’s probably all the hard work I put in and I think you have to have a fighter’s instinct,” Yan said.

“Because when you miss punches or get knocked down, you can fail to do what you’re supposed to do. You have to regain your composure and focus on your mission. I think that plays a role, I’m not sure what it’s called – fighter IQ?

“It could be my Siberian tenacity, conditioning. It gives me an advantage because I had a lot of street fights, I could’ve gone to jail, now I fight for money.

“I have to keep developing myself. There’s no limit to my growth. I have a lot to work on – striking, wrestling. After every fight we try to add something new to the repertoire. I’m young and there’s room for growth and I’ll try to improve with each fight.”

Since his victory, Yan has seen his star rise in his homeland, and has perhaps enjoyed special recognition in Dagestan, part of the country which bred a fellow UFC champion in the form of Khabib.

“It’s all about living conditions. In Siberia there are a lot of determined people that want to move up and improve their life. Why would you want to do that if you have everything you need?

“Guys from the Caucasus are the same. That’s something we (in Siberia) have to catch up with. (In the Caucasus region) all the gyms are full.

“It’s a way of life. The kids start training early, they don’t smoke and go to the gym instead. It’s how they are brought up. It would be great if our region (Siberia) saw more of that.

On his way to the top, Yan has made a mixture of grit and humility something of a mantra, and said he will continue on that path as he bids to carve out a legacy.

“If someone is good to me, I’ll be good to them. If I feel negativity, I’ll answer negatively. I believe that good people understand the situation. Some cheer for me, some don’t, but everyone’s different.” 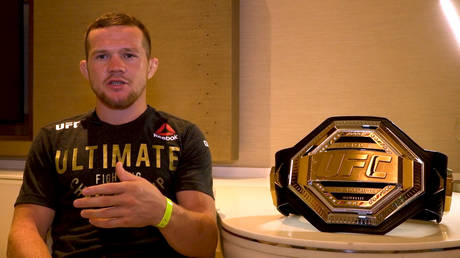