Dana White has shown off the Abu Dhabi island where UFC events are expected to take place this summer, complete with an on-site medical operation providing coronavirus tests and a fight venue made from 350 tons of metal.

The UFC boss’s promotional video said that the project had carried out more than 2,000 tests in mid-June, including swab checks overseen by 17 medical personnel at three facilities, and required a combined total of 400,000 hours of work from a team of 740 staff.

“This is the first look at the testing and infrastructure being built on Fight Island,” White announced on social media, tagging Abu Dhabi’s tourist board.

“This experience is going to [be] so badass for my fighters and my staff. I can’t wait to get there.”

The first card on the island is scheduled to take place on July 11, when welterweights Kamaru Usman and Gilbert Burns will headline UFC 251.

White responded with fist emojis to supporters calling him a “legend” and a “beast”, telling one viewer who claimed events on the island would be “just like any other UFC”: “Not even close.”

Russian lightweight king Khabib Nurmagomedov, whose cousin Umar will debut in a bantamweight contest on the opening night, responded: “You made this. You crazy, Dana.”

White told the undefeated champion: “Time to have some fun, my friend.”

Others were less impressed. “You’re shady, bro,” remarked one critic. “Shady and cheap.”

“It’s pretty f*cking amazing how stupid people are,” White replied, before telling another UFC fan who accused him of undervaluing fighters while asking how much the development had cost: “Trillions.” 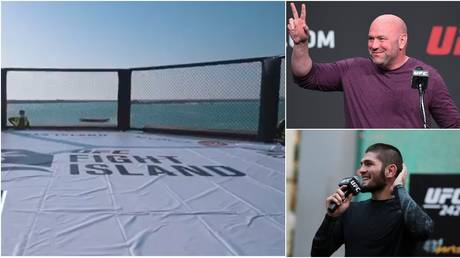