‘I can’t even LOOK at my phone’: World No. 116 player beats Serena Williams before admitting MASSIVE upset win was a ‘dream’

‘I can’t even LOOK at my phone’: World No. 116 player beats Serena Williams before admitting MASSIVE upset win was a ‘dream’

An American tennis player who is trying to break into the top 100 after undergoing major knee surgery has spoken of her joy after beating Serena Williams, edging out the most successful modern player in the women’s game.

Shelby Rogers was attempting to gain much-needed practice and gain the ranking points that could help her qualify for major draws at tournaments when she took on world number nine Williams, who would have been expected to breeze past an opponent ranked 107 places below her.

The huge underdog pulled off a massive upset to reach the semi-finals of the Top Seed Open in Kentucky, hitting back after a first set that went to form to record a narrow 1-6 6-4 7-6(5) triumph.

“It’s every kid’s dream when they are growing up watching her play and to be able to do something like that,” said Rogers, reflecting on the “weird” backdrop created by fans being banned from matches as a result of the COVID-19 pandemic.

Today was a day! Humbling and encouraging moment. Even with no fans on site, I can feel the support from everyone this week.
Thank you all!
💞🎾 https://t.co/s3giKI2kzc

“I went out there really thinking I could win because if you don’t think you can win, you might as well not go out there. I was able to capitalize on the few chances that I did have today.

“I can’t even look at my phone right now, it’s absurd. Any wins right now are really important with this restart of tennis and trying to…get my ranking back where I wanted.

Williams had enjoyed a comeback of her own to beat her sister, former world number one Venus, in three sets in the previous round.

“I could play a lot better,” she observed after losing to a player outside of the top 100 for the first time since France’s Virginie Razzano stunned her in the first round of the 2012 French Open.

“I think that’s the main thing I can take from this match. I made it difficult on myself by making a plethora of unforced errors.”

Rogers has only once been beyond the third round of a senior tournament, reaching the quarter-finals of the French Open, which Williams has won three times, in 2016.

The 27-year-old reached her best ever ranking of 48 the following January, having beaten current world number two Simona Halep in straight sets at the Australian Open.

By sharp contrast, Williams’s haul of 23 Grand Slam singles titles makes the revered 38-year-old the most successful player in the Open Era, and she will draw level with all-time leader Margaret Court should she win her seventh US Open later this month.

Rogers said she was “thankful” for the “perspective” that she had been given by the major knee surgery she underwent in May 2018, ruling her out of the rest of that season and threatening her return to the sport.

“My goal at the start of the year was to get back into the top 100,” she explained. “Then quarantine happened and I was like, ‘no – I was just getting the hang of this thing.

“I don’t think anybody is really playing their best tennis just now. It’s just finding a way to win, get one more ball back in.

“My serve was struggling again but it’s just one point at a time, not getting too discouraged or thinking about who you’re playing or what’s going on.

“It was important for me to go on court knowing that I could win that match and take care of my service game, because she has probably the best service game of all time.

“When she wants to, she can win a point on first serve. You’ve just got to accept that and move on.

Rogers fared less favorably when losing to Jil Teichman, the Swiss world number 68, in straight sets in the semi-finals, but her win over Williams and the circumstances of the occasion left their mark.

“I’m sure it’s really overwhelming when the stadium is packed and probably everyone would be cheering for her,” she said.

“Part of me misses that but…I guess it was maybe evened out a little bit.” 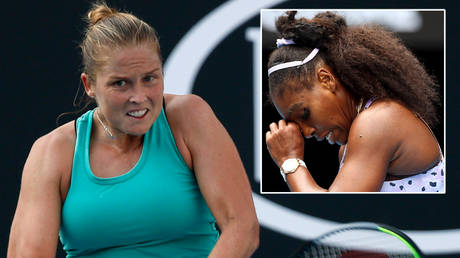