‘I can’t be silent anymore’: Russian world champ Spiridonova reveals ‘dream’ of ‘place for cool girls’ after her gymnastics career

‘I can’t be silent anymore’: Russian world champ Spiridonova reveals ‘dream’ of ‘place for cool girls’ after her gymnastics career

Russian artistic gymnast Daria Spiridonova is eyeing life after her medal-decorated sporting career at the age of 22, revealing her “dream” of running a venue in Moscow for “cool girls who want to be beautiful and successful”.

2015 World Championships gold medalist Spiridonova has been scheming while the sporting schedule has been largely halted this year, and asked her vast fanbase of more than 125,000 followers on Instagram for their thoughts on her vision of a new post-gymnastics venture.

She admitted that she had been plotting her moves “besides sports” for “a long time” and had wanted to turn her attention to a variety of disciplines other than the bars that have brought her two European Championships gold medals and silver at the Rio Olympic Games four years ago.

“I just can’t be silent anymore,” the four-time Russian national champion announced, describing her plan for a new space in Moscow.

“Soon my little dream will come true and I can’t wait to tell you.

“There were a lot of thoughts, ideas, desires and they are still there, but not all at once. I wanted a cosy cafe in the city, I wanted my own photo studio, I was engaged in clothes and will continue to do this more often in the future.

“I wanted to make a cosy, beautiful place for cool girls who want to be beautiful and successful. To come and enjoy, communicate, find new acquaintances, drink delicious coffee and, of course, bring beauty.”

Spiridonova qualified for this year’s Baku World Cup by finishing fourth on uneven bars, only for the event to be postponed as the pandemic affected Azerbaijan.

In the meantime, she has been spending time with boyfriend Nikita Nagornyy – the 2019 World All-Around Champion – heading to the beach for boat rides and sunbathing sessions and indulging her taste for glamor and fashion.

She was forced to defend her literacy to some critics who were quick to pull Spiridonova up on her use of spelling and grammar in the post, although the majority of responses to her idea were positive.

“How cool it is when dreams come true,” wrote one fan.

“Make the place magical, bring joy and self-realization – as well as a nice cash bonus.”

Another pledged: “If you open it, I will immediately come to Moscow to your salon. I will be the first.”

Spiridonova promised to keep her potential visitors in touch. “It is for you,” she explained.

“I want to create the place where you want to come back again and again. Your opinion is really important to me.” 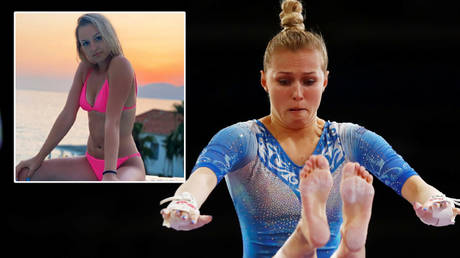