Close
Trending News
HomeSport‘I can have kids at this age’: Russian ‘striptease’ skater Tuktamysheva reveals what she thinks about while landing quads

‘I can have kids at this age’: Russian ‘striptease’ skater Tuktamysheva reveals what she thinks about while landing quads

‘I can have kids at this age’: Russian ‘striptease’ skater Tuktamysheva reveals what she thinks about while landing quads

Russian figure skating star Elizaveta Tuktamysheva who has recently restored a quadruple jump has revealed what she is thinking about kids and possible injuries while executing ultra-c elements.

The 23-year-old is widely regarded one of the most mature and experienced athletes in the sport which has been traditionally dominated by 15 and 16-year-old talents.

Having a triple axel and a quad toe loop in her technical content Tuktamysheva is the only skater who is eligible to compete at the same level with teenage rivals.

Talking about her recent successful attempt of landing a quad the former world and European champion said that she is always thinking about her age while training for difficult jumps.

“I can have kids at this age instead of doing quads. This is what I’m thinking about while training for quadruple jumps. With every new season it will be more and more difficult to make four rotations on the ice.

“Sometimes my inner voice tells me ‘Don’t do it, it’s dangerous’. I cannot be sure that I will safely land it. And then I talk to my coach Alexei Nikalevich (Mishin) asking him ‘I will not be injured, will I?’ and he calms me down saying that everything will be fine,” the skater said.

One of the most technically gifted female skaters Tuktamysheva made headlines two seasons ago after demonstrating her ‘striptease’ dance to Britney Spears’ hit ‘Toxic.’

The athlete launched the so-called undressing trend with her fellow skater miming moves from her exhibition routine. 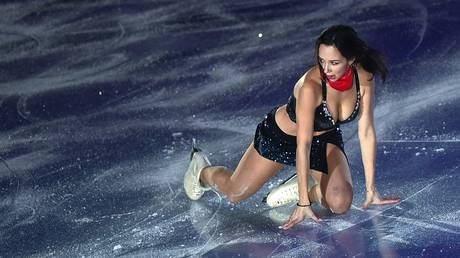