Close
Trending News
HomeSport‘I can do what I want’: Russian swimming champ Efimova tells fans to ‘calm down’ talk of her quitting or being pregnant

‘I can do what I want’: Russian swimming champ Efimova tells fans to ‘calm down’ talk of her quitting or being pregnant

‘I can do what I want’: Russian swimming champ Efimova tells fans to ‘calm down’ talk of her quitting or being pregnant

Russian world breaststroke champion Yulia Efimova has admitted that her coach hates Instagram and insisted that she will not give away training secrets on social media – making the announcement in a post showing off her figure.

The six-time world breaststroke queen is used to receiving adulation from across the world for her stream of snaps from her idyllic base in California, where she has made the most of the sun this summer and posed in a range of skimpy outfits.

Now the 28-year-old has reassured fans who suspected she was expecting a child or had quit the sport by using her first post for more than two weeks to explain why she sometimes refrains from posting prolifically.

Posing side-on in a bikini in front of a pool surrounded by palm trees, Efimova explained that she was reluctant to give away insights into her training for next summer’s rescheduled Tokyo 2020 Olympic Games.

“I just want to say that, if I don’t post my training process, it doesn’t mean that I am not exercising, I quit or I’m pregnant,” the double Olympic silver medalist told her following of more than 211,000 admirers.

“This is my personal page – I can do what I want.

“And in training, I train and take pictures very rarely – only if there is a beautiful sunrise or something very funny.

“The coach doesn’t like this business at all. So calm down and see you soon at the competition.”

Efimova has gone paddle-boarding at Newport Beach, walked across the sand at Laguna Beach and Venice Beach and shared a snap from Hawaii over the last three months.

She rarely accompanies her photos with more than a few words, but the seven-time European champion clearly felt that she needed to address some of the questions she had recently received.

Her legion of fans responded with unbridled support and admiration. “Love this,” replied one.

“You do you. Get after that training and don’t let the comments drive your success.”

Others called her “wonderful”, declared their love for the former world record holder and even directed marriage proposals at her. 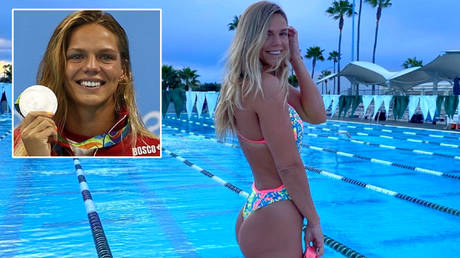 Beirut explosion was one of larges...

'Never seen that before'...