Sports stars have claimed that Donald Trump should wear a mask, respect science and even receive minimal financial support for treatment in the hours since the US President was revealed to have tested positive for COVID-19.

Many of the high-profile figures who have been outspoken in supporting Trump in recent weeks, including UFC fighters Colby Covington and Jorge Masvidal, did not publicly react to the news in the hours following the announcement that sparked a frenzied reaction on social media.

Welterweight Masvidal had been due to take part in a day-long bus tour under the banner “fighters against socialism” with Trump in Florida this Saturday, and had spoken of his joy after the president praised him during a rally ahead of the scheduled presidential election next month.

Covington, who appeared in outfits branded with the Trump-supporting message “Keep America Great” in press conferences and met the president backstage at one of his rallies, had taken to Instagram to back the Republican candidate shortly before the news emerged.

The anti communism bus tour will be arriving at a city near you #supernecessary https://t.co/p8RDrmdKrW

“So then, get this, he finally catches the damn disease!” pic.twitter.com/Vu2ap1Yct9

“Nobody fights harder for America than [Trump],” he insisted, picturing himself sitting in the front row at this week’s presidential debate between Trump and presidential rival Joe Biden.

There was cynicism among some stars. “Nah, I call bullsh*t,” responded former Washington Redskins wide receiver Ryan Grant, adding his voice to those who believe that the news could be fake.

Brooklyn Nets guard Jamal Crawford warned that “we can’t ignore science” and CJ McCollum, of the Portland Trail Blazers, said that the news had been a “reminder to keep wearing my mask” – a precaution against spreading the virus which Trump has frequently questioned.

“So much for a liberal hoax,” one fan told McCollum, while hugely-followed race, politics and culture writer Michael Harriot was more explicit.

Reminder to keep wearing my mask 📝

I respect the people who don’t think now is the time to remind the president of his response to coronavirus, but thousands have been badly hurt by his indifference, and neglect. People still have a right to be angry.

“This ain’t no hoax,” he thundered.

“These muhf*ckas are dumb. Everything they have in life came from hubris and whiteness.

“They couldn’t plan a picnic if you gave them a basket and a blanket. This dumb f*ck had every protection in the universe available to him and still caught COVID.”

Alluding to the scandal over Trump’s tax returns and reform of former incumbent Barack Obama’s healthcare rulings, NFL star-turned-write Chris Kluwe said the president should receive a minimal level of financial support for his treatment.

“Just really praying right now that our president, his family and all his close political supporters get the same amount of care as – and I’m going to pick a number at random here – 208,000 American citizens,” he added, reacting as part of a string of tweets criticizing Trump.

Donald Trump should get exactly $750 of public medical assistance

Think how stupid you have to be to be president with all the protection and resources he has — to get this virus.

Former NBA guard Rex Chapman said: “Think how stupid you have to be, [being] president with all the protection and resources he has, to get this virus.”

Three-time NFL All-Pro Shawne Merriman, though, was scathing of those wishing ill health on the president.

Replying to a now-deleted tweet by actor and rapper O’Shea Jackson Jr, Merriman said: “We’re living in a time where not wishing bad health on anyone is somehow negative.” 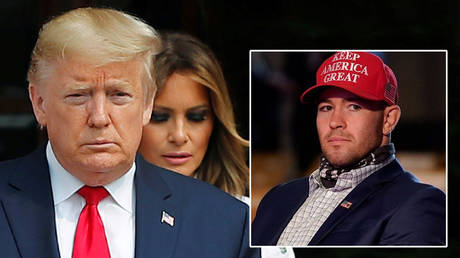