Close
Trending News
HomeSport‘I am worried about my safety’: Athlete fears she will go to jail if she returns to Belarus, could seek asylum in Germany, Austria

In one of her first interviews since a reported attempt to forcibly repatriate her back to Belarus from Tokyo for criticizing sports bosses, Kristina Timanovskaya has claimed she was threatened, fears jail and will seek asylum.

Runner Timanovskaya was preparing to run in the 200m at the Games on Monday when she was abruptly told she would be escorted to the airport, put on a flight to her homeland and play no further part in the competition in the wake of her public criticism over an alleged lack of doping kits and a late decision to include her in a relay race.

The Games debutant appealed to the International Olympic Committee (IOC) for help from the terminal, suggesting that she was being pressured to take the flight against her will in a move that the Belarus Olympic Committee said had been made because of her “emotional and psychological state”.

Timanovskaya said she had received phone calls threatening her if she did not take down a video she initially published on Instagram voicing her concerns.

She deleted the clip because she was assured that the calls would stop, and then says the head coach of the national team, Yuri Moisevich, told her on Saturday that she should quit the Olympics and fly home citing injury.

In what Timanovskaya recalls as a long discussion, she says she was advised that she would be removed from the national team, deprived of work and face other consequences if she competed.

On Sunday, Moisevich and a representative, Artur Shumak, visited her room and told her to pack her bags, according to Timanovskaya, who drew out the process despite their frequent visits to check on her readiness, saying that she deliberated with her husband and others on what action to take.

After being taken to the airport, Timanovskaya says she was met by a large delegation from the Belarussian team and told that she would miss her flight if she contacted Japanese police, which she did in order to secure the protection she currently says she is under.

“I am afraid that in Belarus they might put me in jail,” Timanovskaya told Tribuna. “I am worried about my safety. And I think that at the moment it is not safe for me in Belarus.

“As Moisevich told me, this issue is no longer at the level of the [athletics] federation, not at the level of the Ministry of Sports, but at a higher level. [They decided] I need to be eliminated from the Olympics and returned home because I interfere with the team’s performance.

“I need to be removed so that everyone calms down and competes further. And this is even despite the fact that tomorrow I had to run [the] 200 meters.”

Timanovskaya says she remains “outraged” by the lack of organization that she claims ruled three athletes out of traveling to Tokyo because of a lack of doping kits and meant no-one spoke to her personally about taking part in the relay race.

She described “complete chaos” and “complete disrespect” for athletes, and was backed by figures and groups including the Belarusian Sport Solidarity Foundation.

Poland 🇵🇱 is ready to help Kryscina Tsimanouskaya a Belarusian athlete ordered by the Lukashenka regime to return form Olympic Games to Minsk. She was offered a humanitarian visa and is free to pursue her sporting career in Poland if she so chooses.

A source at the foundation, which helps athletes who have been jailed or ostracized for their political views, told Reuters that Timanovskaya planned to request asylum in Germany or Austria on Monday.

“We appealed to a number of countries for help,” said the foundation’s head, three-time Olympic swimming medalist Aliaksandra Herasimenia, adding that Poland had offered to assist first.

Exiled Belarusian opposition leader Sviatlana Tsikhanouskaya implored the IOC to become involved, telling them that Timanovskaya “has a right to international protection and to continue participation in the Olympics.”

“It is also crucial to investigate Belarus’ NOC violations of athletes’ rights,” she added.

Vitaliy Utkin, a member of the Belarusian parliament, was quoted by state-owned broadcaster STV to have called Timanovskaya’s behavior “betrayal and treachery” that was directed “towards the Belarusian people and her fellow athletes”.

Several Belarusian athletes were jailed for their part in street protests last year over the alleged rigging of elections by president Alexander Lukashenko, which he has denied.

Some lost their state employment or were removed from national teams for supporting opposition parties.

Lukashenko’s son, Viktor Lukashenko, is the president of the Belarus Olympic Committee.

“I am with the police and then I will seek asylum,” said Timanovskaya. “We will act step by step. I plan to leave Tokyo, but not on the flight they wanted me to be on.” 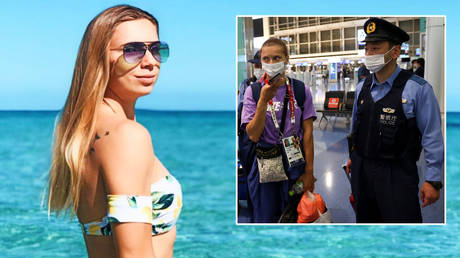