‘I am the best’: Chelsea women’s team reveal how they used UFC star Rose Namajunas as inspiration on run to Champions League final

‘I am the best’: Chelsea women’s team reveal how they used UFC star Rose Namajunas as inspiration on run to Champions League final

There aren’t many more inspirational figures in MMA than reigning strawweight queen Rose Namajunas – and the Chelsea women’s team would likely agree after she was used as inspiration for their historic run to a European final.

The Blues reversed a first-leg deficit to defeat Bayern Munich 5-3 on aggregate to qualify for their first Women’s Champions League final on Sunday ahead of a May 16 final against Barcelona.

Goals in the final minutes from Pernille Harder and Fran Kirby were enough to oust the much-fancied German side en route to a 4-1 win in the second-leg which secured the hosts’ passage to this month’s showpiece game.

Emma Hayes’ side faced an unenviable task in taking on Bayern Munich, who entered the second game with their tails up after a close win in the first semi-final encounter between the sides.

And as an emotional Hayes elaborated shortly after her team’s historic win, she used some rather unconventional motivation for her team in advance of the game – in the shape of UFC champion ‘Thug’ Namajunas.

“I played them a video from a UFC star,” said Hayes. “It was a one-minute video before the game and she was talking to herself, saying ‘I am the best, I am the best.’

“She won the fight and straight after the fight the cameras said to her, ‘You were saying to yourself I am the best’ and she said, ‘But yeah, I am the best’. And that’s what I said to the players before the game.

“Someone described us as ‘mentality monsters’, and we are the best. We’re in this position because we deserve it.” 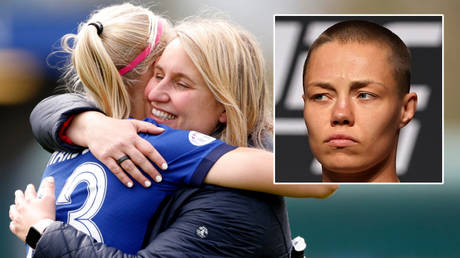