‘I am SORRY’: Cyclist banned for NINE MONTHS over horrific crash that left countryman in COMA after facial reconstruction (VIDEO)

‘I am SORRY’: Cyclist banned for NINE MONTHS over horrific crash that left countryman in COMA after facial reconstruction (VIDEO)

Top cyclist Dylan Groenewegen has been slapped with a nine-month ban for a sprint crash that sent Fabio Jakobsen head-first into a barrier on the Tour of Poland, leaving his countryman in a coma and needing facial reconstruction.

Groenewegen described the horror smash, which flipped 23-year-old Jakobsen over signage towards the barrier, as “forever a black page in my career” after learning of the punishment handed out by the International Cycling Union (UCI).

Jakobsen was placed in a medically-induced coma for two days in hospital after the shuddering collision, described by seven-time Tour de France winner Lance Armstrong as one of the worst accidents he had ever seen.

“The rider collaborated with the investigation and accepted to serve a period of suspension until 7 May 2021,” said the union.

So, UCI suspends Groenewegen until May next year but refuses to take responsibility for the insane finish, which sports directors and riders have been criticizing and warning the UCI about for years…

“The rider also accepted to take part in a number of events to the benefit of the cycling community.”

The 27-year-old has not competed since breaking his collarbone on the first stage of the race in August.

“I follow the news of Fabio’s recovery very closely,” he said in a statement.

“I can only hope that one day he will return completely.

“Closing the disciplinary matter creates clarity. That gives me the opportunity to look ahead again.

Crash in the #TDP20 today, @FabioJakobsen now in Coma. After months of racing virtually, appears they have to remember how to race in bunch sprints again. pic.twitter.com/ebnVU4xrgC

“I am happy about that, even though May the 7th is still far away. Together, [my team and I] will work towards that day, both physically and mentally.”

Groenewegen’s team, Jumbo-Vista, had called his conduct in the race “unacceptable” and pledged that he would not race for them again until a ruling was made.

Jakobsen was described as being in a “good” condition by his team, Deceuninck-QuickStep, after leaving hospital, although they said that his recovery would be “long and arduous”, with speaking and eating “a challenge”.

He had additional surgery on his jaw, a second operation to reconstruct his face and mouth in the Netherlands last month and is expected to require another operation on his face next year.

“I had to recover from my brain contusion and other bruises and injuries for a long time,” Jakobsen wrote in an update to fans, thanking his girlfriend, Delores Stougje, on their four-year anniversary alongside a photo of them together before the crash.

4 weeks after the reconstruction of my upper and lower jaw it was time for the stitches to come out. The process of healing is going well. The transplanted bone has to grow strong and firm for the next 4 months now. Next surgery is scheduled in 2021. pic.twitter.com/4MnBJ3KfXX

In a couple of weeks my pelvic crest should be healed and strong like before again. From then I can slowly start training on the bike again!

“The wounds and scars on my face are healing up well.”

Describing his second stay in hospital, he explained: “The surgery involves placing bone taken from my pelvic crest in my upper and lower jaw, because a lot of bone is missing there.

“This bone will have to heal for several months. After that, more surgery will take place to put implants in my jaw so that I can get new teeth, as I lost them during my crash. Both my hip and mouth are painful but day by day I am progressing.”

Jakobsen thanked fans for their support and said that he hoped to start training again once his pelvic crust had healed.

“I am sorry because I want to be a fair sprinter,” said Groenewegen, admitting that he deviated from his line.

The only reason for this suspension is the graveness of the injuries caused by this. All the recent comparable actions have been sanctioned with a relegation in the race. Not even an exclusion from a race iirc?

Expect nothing less from @UCI_cycling . Sadly nothing will change. Riders need very strong representation. Recent races have shown as much.

“The consequences were very unfortunate and serious. I am very aware of that and I hope this has been a wise lesson for every sprinter.”

The vast majority of readers offered support in response to Groenwegen’s announcement, but many were more critical of what they perceived as a reluctance by the union to take action that would make event finishes safer.

“UCI suspends Groenewegen until May next year but refuses to take responsibility for the insane finish, which sports directors and riders have been criticizing and warning the UCI about for years,” pointed out cycling journalist Mikkel Conde.

“The only reason for this suspension is the graveness of the injuries caused by this,” added a Dutch cycling fan.

“All the recent comparable actions have been sanctioned with a relegation in the race. Not even an exclusion from a race, if I recall correctly.” 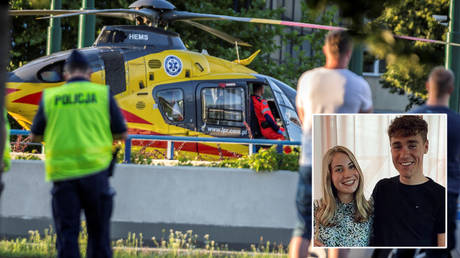 Iran to take ‘any opportunity’ to...