Novak Djokovic could face a test for COVID-19 after Grigor Dimitrov, who came into close contact with the world No. 1 before dropping out of a match against him citing illness, revealed he had been infected with the virus.

Dimitrov blamed “physical effort and exposure to the sun” when he withdrew from his encounter last Sunday against Djokovic, who has been criticized for ignoring precautions against catching the virus while being pictured hugging and partying with the players taking part in his competition in front of packed crowds in Serbia.

The Bulgarian world No. 19 looked uncharacteristically sluggish in a straight-sets defeat to lower-ranked Croatian player Borna Coric during his appearance at the widely-questioned Adria Tour, and has now urged his fans to “please stay fit and healthy” in an apologetic post admitting that he tested positive after returning to Monaco.

“I want to make sure anyone who has been in contact with me these past days gets tested and takes the necessary precautions,” the former world number three and 2019 US Open semi-finalist wrote.

“I am so sorry for any harm I might have caused. I am back home now recovering.”

Dimitrov’s diagnosis means that Djokovic and other participants, including world No. 3 Dominic Thiem and world No. 7 Alex Zverev could seek tests for the virus in the coming days.

Djokovic defended his decision to organize the competition but came under scrutiny from shocked viewers for scenes defying the health guidelines being observed across much of the world in a bid to curb the spread of the highly infectious and potentially deadly virus.

Despite the absence of lockdown rules in Serbia and a relatively low number of cases across the country, the allowance of a capacity 4,000 fans into the arena in Belgrade caused unease among many commentators, as well as the sight of Djokovic and his fellow players embracing each other while playing an accompanying football match and posing in close proximity for press photos.

“I know there have been some criticisms, especially coming from the West,” Djokovic acknowledged to Eurosport, having clasped a ballboy to his chest after playing a rally against him at one point.

“‘Why do we have a crowd? Why not having social distancing? What is going on and why are they having this kind of event in the midst of a very hard pandemic in the West?’

“But you know, it’s hard to explain to people that the situation is really, really different maybe in America or the UK than it is in Serbia or surrounding countries.”

Djokovic has also questioned the concept of vaccinations and called the restrictions being planned for the US Open in virus-hit New York later this year “extreme”.

Speaking at a press call before the tournament, Djokovic said it was “amazing” that fans would be able to attend the event as a result of the Serbian government lifting restrictions on outdoor gatherings.

“You can criticize us and say this is maybe dangerous but it’s not up to me to make the calls about what is right or wrong health-wise,” he argued.

“Of course, lives have been lost and that’s horrible to see in the region and worldwide. But life goes on and we as athletes are looking forward to competing.

“We are doing what the Serbian government is telling us and hopefully we soon will get back on tour collectively. We’ve had better numbers compared to some other countries.”

Disappointed, but not surprised.

I knew this would eventually happen. That tournament in Serbia should have never happened.

To all the brain surgeons who somehow thought Serbia was immune from such outcomes, get your heads in the game.. This pandemic is light years from over.. Get yourselves informed please..

Fans rounded on the tournament in reply to news of the announcement by Dimitrov, who accompanied the post with a photo of himself wearing a mask.

“Disappointed but not surprised,” responded one, echoed by another who hoped that “now people will have more common sense” and a tennis fan who wrote: “I knew this would eventually happen. That tournament in Serbia should have never happened.”

A coach blasted: “To all the brain surgeons who somehow thought Serbia was immune from such outcomes, get your heads in the game. This pandemic is light years from over. Get yourselves informed, please.”

In the US, where there have been more than 122,000 deaths as a result of the virus, New York governor Andrew Cuomo gave his backing this week to the US Open taking place in a restricted form as scheduled from the end of August.

The event is expected to be played without crowds and could limit players to being accompanied by only one other person. 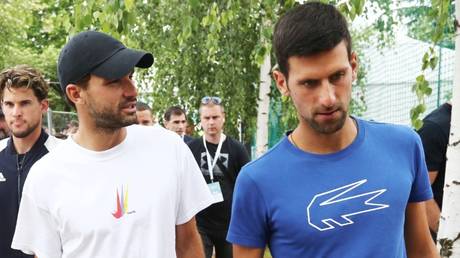 How to go live on TikTok?