Close
Trending News
HomeSport‘I am SO ready for 2021’: UFC babe Ostovich unveils racy calendar in skimpy swimwear as she admits latest fight could be her LAST

‘I am SO ready for 2021’: UFC babe Ostovich unveils racy calendar in skimpy swimwear as she admits latest fight could be her LAST

‘I am SO ready for 2021’: UFC babe Ostovich unveils racy calendar in skimpy swimwear as she admits latest fight could be her LAST

UFC women’s flyweight Rachael Ostovich has used the build-up to her first fight in 23 months to launch a revealing calendar and beauty site, calling fans her “babies” while admitting she has worked “day and night” on the shots.

Hawaiian stunner Ostovich takes on Gina Mazany on the preliminary card of UFC Fight Night on Saturday, and has interspersed clips from the weigh-in in Las Vegas with calls encouraging her Instagram following of more than 728,000 to pre-order her racy 2021 calendar.

Footage from the photoshoots shows the 29-year-old in a series of colorful swimsuits, looking seductively at the camera and kneeling at the shore on a beach.

“So much to be thankful for,” Ostovich announced, wishing her admirers a Happy Thanksgiving.

“Check it out and show your girl some love.”

Ostovich has just completed a one-year ban, reduced to eight months, after testing positive for the banned substance Ostarine, which was discovered in tainted supplements.

Her only complaint about returning to action was the weight cut required to make the limit, which she reached after settling at her fight week base and taking a range of tests including Covid-19 checks.

“My mid-section is a little fluffy,” she reported earlier in the week. “The human body is so interesting.

“I really had to sit down and thank my body for going through all these changes. I’m learning to not take my Health for granted.

“I’ve only got one body. I’m so happy that I made positive changes to take care of me better.”

Ostovich is seeking her first win in almost three years and her maiden UFC victory after losing her last two fights by submission, last appearing when she was beaten by fellow pin-up Paige VanZant in January 2019.

American Mazany last won a UFC fight more than three years ago, subsequently suffering three straight setbacks including a 22-second demolition at the hands of Julia Avila in June.

Heavyweight Derrick Lewis, whose headline bout with Curtis Blaydes was called off after his opponent reportedly tested positive for Covid-19, had joked that his Instagram following could not compete with Ostovich’s, although he added that he was considering setting up an account on modeling subscription site OnlyFans dedicated to his feet.

“I was just speaking to him in the next room over,” she said, when asked about the idea in the opening question of her final pre-fight press conference. “I’m going to have to ask him for a discount code.”

Discussing her own long wait to fight again, she said: “This rollercoaster did not stop – there was no endgame for this one.

“I don’t even know how that whole [doping] situation even happened. The thing with [doping authority] USADA’s technology is that it’s so good that it can allow them to trace things to years and years back, things you consumed unknowingly.

“No gyms are open in Hawaii and even without Covid, living on an island made things harder.

“I know that [Mazany] needs the win just as much as I do. This is serious.

“This could be my last fight – I’m looking at it in those terms. I’m feeling really good.” 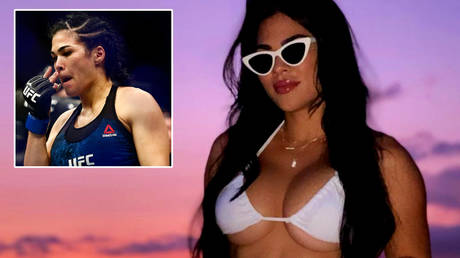 Thousands of protesters march in F...