Valentina Shevchenko has revealed that her mother, Elena, has become a World Muay Thai Champion – just days before the women’s flyweight champion and sibling Antonina are set to become the first sisters on the same UFC card.

Shevchenko senior, who is president of the Kyrgyzstan Muay Thai Federation, performed a series of moves on a mat in front of the organization’s flag in a virtual tournament as she demonstrated her shadow boxing skills in the discipline that her daughters started out in.

The 56-year-old’s gold medal certificate was duly shared by Shevchenko with her fanbase of more than 1.6 million on Instagram, having provided inspiration for her youngest daughter ahead of her meeting with Jennifer Maia at UFC 255 on Saturday.

“My mom was preparing for about two months for the World IFMA (International Federation of Muaythai Associations) Muay Thai Championships,” Shevchenko told ESPN, speaking glowingly of the multiple Kyrgystan champion.

In case you wondered how Valentina Shevchenko [@BulletValentina] became so good at what she does…this is her mom.

The toughest mom on planet 💪

Congratulations to the Mother Champion!

“She has a gold medal and I am so proud to be her daughter. This is so motivational for me.”

According to the federation’s records, Elena last fought when she secured a points win in a Masters Female Over-41 fight almost exactly ten years ago.

Shevchenko will have the chance to watch another close relative in action when her sister – former Muay Thai light heavyweight world champion Antonina – takes on Brazilian “Queen of Violence” Ariane Lipski earlier in the night.

The pair have never fought together on the same UFC bill, although they have often been part of the same Muay Thai events.

“We have been in martial arts for so long and experienced so many different styles of competition,” said Shevchenko, adding that the family affair was “definitely not a distraction”.

“Back when we fought in Muay Thai, we were fighting on the same card and in the same championship every time.

“I was fighting in the lower weight class and she is higher, as we had a five or six-pound difference between weight classes.

“It was like me literally fighting the finals and she was next to me. So, she was just preparing, waiting for when my fight was done.”

“For someone who is experiencing it for the very first time, there probably would be new feelings – but not in our case, totally not.

“I really loved to fight on the same card because we trained together, had training camps together, supported each other and rested together after the fight. That’s good.” 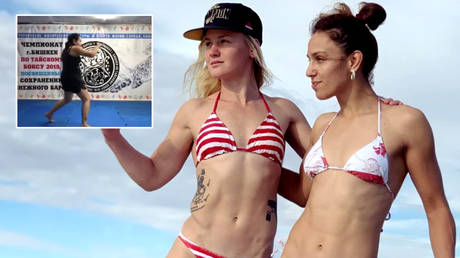