‘I am not afraid’: Novak Djokovic dismisses health concerns ahead of US Open as he pursues Roger Federer’s Grand Slam record

‘I am not afraid’: Novak Djokovic dismisses health concerns ahead of US Open as he pursues Roger Federer’s Grand Slam record

World No. 1 Novak Djokovic admits his pursuit of Roger Federer’s singles titles record played a part in his decision to play in the US Open, despite ongoing concerns surrounding the health and safety of the event.

Seventeen-time Grand Slam champion Djokovic remains just three wins behind Federer’s record of 20 Slam wins, and he told the New York Times that his decision to play the event beginning Aug. 31 was “of course” influenced by his desire to catch the Swiss great’s tally.

“One of the reasons why I keep on playing professional tennis on this level is because I want to reach more heights in the tennis world,” Djokovic said.

Djokovic, 33, has been in fine form recently, winning five of the last seven men’s singles Grand Slams, but only confirmed his attendance at the US Open once he was assured the players returning to Europe afterward wouldn’t be required to enter quarantine, which would affect his ability to play on the European circuit.

“I was very close to not coming,” he said, confirming that he only came to a final decision in recent days.

“There were a lot of uncertainties.”

The ongoing COVID-19 situation has decimated the global sporting calendar in recent months, with tennis feeling a particular pinch following a spate of canceled tournaments, including Wimbledon.

But Djokovic, who was diagnosed with COVID-19 earlier this year, says he is satisfied with the health and safety protocols in place.

“I am personally not afraid of being in a risky, dangerous health situation for myself. If I felt that way, I most likely would not be here.”

Djokovic also took a defensive stance when asked about the controversial Adria Tour he helped arrange several months ago during the height of the coronavirus crisis.

Several clusters of infections were associated with the tournament, including Djokovic, but he says his symptoms were mild.

“We tried to do something with the right intentions,” Djokovic said.

“Yes, there were some steps that could have been done differently. But am I going to be then forever blamed for doing a mistake?

“If I had the chance to do the Adria Tour again I would do it again.” 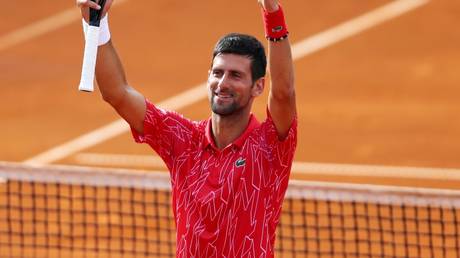 Brits shopping MORE than before pa...