‘I am EXTREMELY motivated’: Novak Djokovic says he’s in prime shape to take down Rafael Nadal in French Open final

‘I am EXTREMELY motivated’: Novak Djokovic says he’s in prime shape to take down Rafael Nadal in French Open final

Novak Djokovic battled past Stefanos Tsitsipas to earn his spot in the French Open final, and said that he’s ready to continue his stellar form and defeat Rafael Nadal after a “great battle” at Roland Garros.

Djokovic leads the head-to-head rivalry between the pair, having won 29 times against the Spanish ace, compared to Nadal’s 26 victories. But the challenge of playing Nadal on clay remains, according to the Serb, the toughest test in tennis.

“Obviously the conditions are different than the ones that we are used to playing in May and June,” Djokovic told reporters after his semifinal win on Friday.

“I think that could be a better chance for me, obviously the ball not bouncing as high over the shoulder as he likes it usually. I mean, look, regardless of the conditions, he’s still there, he’s Rafa, he’s in the finals, we’re playing on clay.”

Despite the lack of fans at Roland Garros, the matchup looks set to deliver another spectacular meeting between the pair, who have served up some of the most thrilling finals in tennis history during the course of their rivalry.

Djokovic said he isn’t sure if Sunday’s final will stack up with some of his past finals in terms of sheer scale, but with Djokovic finding the French Open title the hardest to win over the course of his career, he said he’s laser-focused on the task at hand as he looks to dethrone the man widely considered to be the best clay-court player on the planet.

“Finals of a Grand Slam is always huge,” said Djokovic, who lost to Nadal in the final at Roland Garros in both 2012 and 2014.

“But I don’t think it’s the biggest match that I have ever played in my life. I think there were some bigger ones.

“In terms of importance, I mean, if I have to compare, even though I don’t like, probably the first Wimbledon final that I actually played against him (in 2011). Wimbledon was always the one that I wanted to win as a kid and dreamed of winning.

“That’s probably the one that stands out. And the French Open 2016 against Andy Murray here. Every French Open final that I played was the match of my life before I actually won it.

“This is the (Grand Slam) that I won the least, so of course I am extremely motivated to try to get my hands on another one.”

And even though he had a tougher route to the final, Djokovic said he’s sure he’ll stride out onto the famous red clay of Roland Garros for Sunday’s final fit, firing and fresh as he bids to claim Grand Slam number 18.

“I’m not feeling exhausted physically so much after tonight’s match,” he said.

“It was a great battle. But I feel fine. I think a day and a half will be plenty of time for me to recover. I’m looking forward to a great battle with Rafa.” 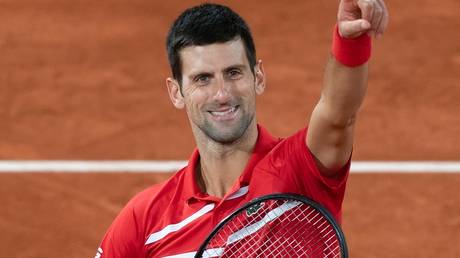