Football world governing body FIFA has hit Hungary with a two-game stadium ban and a hefty $216,000 fine as punishment for the racist abuse directed at England players in a World Cup qualifier.

The incident took place at the 60,000-seater Puskas Arena in Budapest, which played host to a number of games during the Euro 2020 tournament this summer.

As a consequence of the ruling, Hungary will play their next home match behind closed doors.

A ban for a second match will be suspended as part of a two-year probationary period.

As mentioned, Hungary have also been rocked by a $216,000 fine, which eclipses the sanctions they previously received from UEFA such as a $116,620 penalty for fans’ homophobic and racist behavior during Euro 2020, where a two-match ban for supporters was also administered.

In a statement, the authority said: “The FIFA Disciplinary Committee has imposed a ban and a substantial fine on the Hungarian Football Federation (MLSZ) in relation to the racist behavior of numerous supporters during the FIFA World Cup Qatar 2022 qualifying match between Hungary and England on 2 September 2021.”

“After analyzing and taking into consideration all the circumstances of the case, specifically the seriousness of the incidents (racist words and actions, throwing of objects, lighting of fireworks, blocked stairways), the Committee decided that the MLSZ would play its next two home matches in FIFA competitions without spectators, the second match being suspended for a probationary period of two years,” it added.

“In addition, the Committee imposed a fine of CHF 200,000 ($216,000). FIFA’s position remains firm and resolute in rejecting any form of racism and violence as well as any other form of discrimination or abuse,” it concluded.

In the 4-0 thumping by the Three Lions, black stars Raheem Sterling and Jude Bellingham were the recipients of monkey chants from some portions of the crowd throughout the game, while the whole starting XI were more widely booed for taking the knee prior to kick-off.

England players and staff were also targeted by missiles, with Jack Grealish and Declan Rice drinking from cups thrown onto the pitch to taunt the home support.

Coach Gareth Southgate was not impressed by such a response, though, and also pointed out that England as a society faces similar issues to those experienced in Hungary. 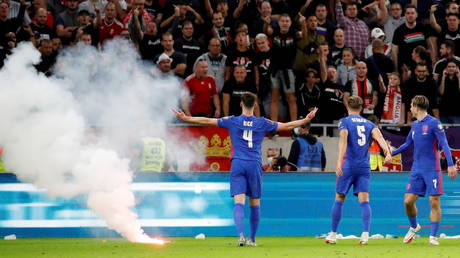