A basketball-playing robot stole the show at half-time in the USA’s shock defeat to France at the Tokyo Olympics over the weekend, inspiring awe but also no shortage of terror on social media.

The robot was rolled out to show off its skills at the Saitama Super Arena, making a shot from the three-point line and then shifting back to half-court distance to sink a long-range effort.

A basketball robot. For your pleasure. pic.twitter.com/5LZF2vpwNg

According to reports, the humanoid baller was a CUE, a robot first created by Japanese giants Toyota in 2018.

One model of the robot set a Guinness world record in 2019 for the “most consecutive basketball free throws by a humanoid (assisted)” – making 2,020 shots in a row in a symbolic nod to the Tokyo Games.

The bot’s accuracy was just as unerring in Saitama on Sunday – sparking admiration on social media but also concerns over the speed at which robots could soon overtake their human masters.

Isn’t this how SkyNet started?

Fun fact: that robot can throw a basketball at 300mph and kill up to five people at once

We all know where this leads. Please stop. pic.twitter.com/yNRtE9Db28

The official Olympics website did little to quell the fears, describing the half-time guest as “terrifyingly life-like in height.”

Others, though, were far less impressed, noting the lengthy amount of time it took to prepare the humanoid for each shot.

Not going to lie a robot making a ball from a set distance using a catapult type motion really doesn’t seem super difficult to program with the tech we have these days. Now if this thing had a smooth shooting motion Id be a lot more impressed.

There’s no way this robot could handle the full court press. Get in his face and put pressure on him. It’d be nothing but turnovers. Then imagine Bobby Knight screaming at this thing on the sidelines.

Zero defense – no way this robot could play in the league

When the reali-life action returned, the USA suffered a shock 83-76 defeat to France in their Group A clash, ending a 25-game unbeaten run for the Americans at the Olympics.

The official Olympics website used the defeat and the appearance of the bot to indulge in a bit of trolling at the Americans’ expense.

“After suffering a shock defeat, don’t be surprised if Team USA are calling up Tokyo’s basketball robot if they find themselves in need of points again,” read a cheeky remark. 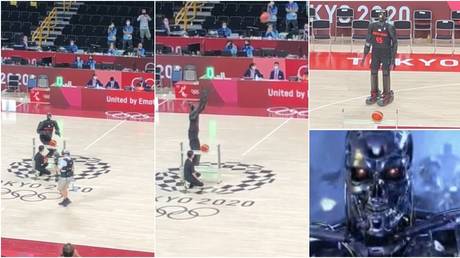