General secretary of the Russian Boxing Federation, Umar Kremlev, has expressed his condolences over the tragic passing of Khabib Nurmagomedov’s father, Abdulmanap, describing it as a huge loss for the sports community.

“He will stay in our memories forever. It’s a huge loss for the sports world,” Kremlev wrote on his Instagram page.

The world-renowned mixed martial arts coach died in a Moscow hospital on Friday due to complications stemming from Covid-19 infection aged just 57.

Nurmagomedov senior had first fallen ill at the end of April in his homeland of Russia’s Republic of Dagestan, where he was treated in a local hospital for pneumonia-like symptoms.

After his condition worsened, Abdulmanap was sent by special flight to Moscow where he was treated in a military hospital where he tested positive for Covid-19.

He suffered a heart attack and stroke after being diagnosed with coronavirus, which required emergency bypass surgery, after which he was twice placed into a medically-induced coma.

Abdulmanap’s condition had been reported by doctors as ‘serious but stable’, but on Friday it became known that he sadly lost his battle with the disease. 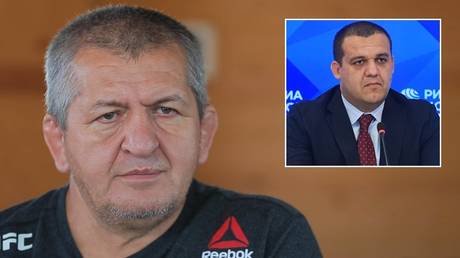