Close
Trending News
HomeSport‘How much will someone pay me to throw the towel in?’: Darren Till trolls Mike Perry after he offers $5K to corner UFC rival

‘How much will someone pay me to throw the towel in?’: Darren Till trolls Mike Perry after he offers $5K to corner UFC rival

‘How much will someone pay me to throw the towel in?’: Darren Till trolls Mike Perry after he offers $5K to corner UFC rival

UFC star Darren Till has asked fans how much they would pay him to throw in the towel during rival Mike Perry’s next fight after pledging $5,000 to crowd-funding campaign in which Perry is auctioning a role in his corner team.

Perry, who has long been considered one of the UFC’s more unconventional characters, opted for the public campaign to identify a new cornerman after having just one ‘coach’ – his girlfriend Latory Gonzalez – in his corner for his judges’ decision win against Mickey Gall in June.

READ MORE: ‘You both beat up old men, so makes sense’: Fans mock UFC’s Mike Perry after he calls out Conor McGregor for boxing bout

Perhaps sensing a good public relations stunt (or maybe even a method to generate some easy money), Perry announced on social media this week that he is accepting bids to be his new cornerman, with the winner of the online auction being granted full corner status for his upcoming November fight with former welterweight champion Robbie Lawler.

Perry’s on-off rival Darren Till couldn’t resist the opportunity. Liverpool’s Till has long maintained an acrimonious relationship with Perry dating back to 2017 when a furious Perry confronted Till cageside in Poland following Till’s win against Donald Cerrone. Since then, the two have engaged in numerous social media spats, with Till even creating the website MikePerryIsABum.com aimed at poking fun at ‘Platinum’.

Whoever gives me the most money can be in my corner with @latory_g ,…

The situation between the two has soured somewhat in recent times, with Perry blocking Till from his various social media accounts and proclaiming in a recent interview that he is prepared to “go to jail” for what he will do the next time he sees Till in public.

However, that may end up being sooner than he thinks after Till announced that he has bid $5,000 for Perry’s online auction – and if this seemed just like idle talk, Perry’s manager, Abe Kawa, says that the deal is near completion so long as Till commits to paying his own air-fare.

You are probs right, I won’t have tine to throw the towel in. #RawDog https://t.co/t5YowGr4ym pic.twitter.com/FUaWUv2SfG

The light-hearted Till couldn’t resist an opportunity to poke further fun at Perry, though, writing on Twitter on Tuesday afternoon that he would consider throwing in the towel during Perry’s fight with Lawler if somebody pays him enough.

Never one to back down, Perry shot back almost immediately with images from Till’s KO defeat against Jorge Masvidal suggesting that it became “too late” to throw in the towel during that fight.

This particular story seems like it will develop further between the two social media enemies but if the situation comes to pass that Perry is cornered against a former UFC champion by his girlfriend and a longtime rival fighter, it will be one of the more unusual situations in UFC history – and that is saying a lot. 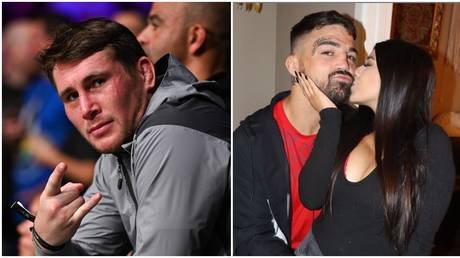