Close
Trending News
HomeSport‘How is this allowed to happen?’: Debts at Champions League giants with highest-paid football boss in the world ‘spiral over $1BN’

‘How is this allowed to happen?’: Debts at Champions League giants with highest-paid football boss in the world ‘spiral over $1BN’

‘How is this allowed to happen?’: Debts at Champions League giants with highest-paid football boss in the world ‘spiral over $1BN’

Champions League contenders Atletico Madrid, who spent $140 million on Joao Felix last year and pay Diego Simeone the highest salary of any football manager in the world, have reportedly seen their debts soar above $1 billion.

La Liga giants Atletico’s astonishing debt levels, which are set to be ratified with a vote on their preliminary annual accounts, come in spite of revenues that are said to include almost $48 million from commercial partnerships, just shy of $93 million from advertising and almost $147 million from their share of lucrative broadcast rights.

Their playing costs feature a salary of around $49 million for former Argentina star Simeone, who has guided the club to the knockout stages of the Champions League in all but one of the last seven seasons, twice suffering late losses to city rivals Real Madrid in the final.

Uruguay forward Luis Suarez joined for a modest fee of around $7 million this year, but his whopping reported wage of $210,000 a week illustrates part of the reason why former club Barcelona, who have also faced financial pressures this year, were keen to sell the striker.

🎶999 million euros of debt sitting on a wall🎶

Then a teenager, Joao Felix became the fifth most expensive signing in history when he joined from Benfica in July 2019, and the Portugal forward is believed to have agreed a basic salary of $3.9 million when he became the club’s record signing.

Atletico’s finances have consistently come under scrutiny since they became a PLC in 1992. In 2000, the club’s offices were raided and late former president Jesus Gil – who has been described as “Spanish football’s Donald Trump” – was jailed for three-and-a-half years.

The club avoided tax responsibilities of $46 million on their way back to La Liga after relegation, but owed creditors more than $557 million by the time former player Simeone was appointed in 2011.

UEFA temporarily withheld Atletico’s Europa League prize money in 2012 in a punishment that was later overturned, and they were widely reported to have gone beyond their means when they signed Radamel Falcao from Porto for $43 million, having sold Sergio Aguero to Manchester City in a bid to fund tax payments.

Atletico spent around $289 million on the 68,000-capacity Wanda Metropolitano, which has been their home since 2017, despite the high-profile debt problems that have dogged them since playboy businessman Gil’s reign.

Jesus Gil put the club into debt decades ago didn’t pay taxes and also left his successors a crumbling stadium. The reason it’s not a mess is because the debt is now private and paid in installments but it’s the reason Atletico are a sell to buy team and will be for years to come

It’s a managed debt they pay in installments plus they had to pay for the new stadium. COVID added to debt. They’ll just have to keep the installments going for an extra year or 2.

The debts from the previous owner and they pay in installments to private investors so they’ll never go into administration. They use the money from Top 3/UCL and tv so they’ll never have to sell players. Just means they still have to be strict with wages.

“How is this allowed to happen?” asked one fan, while others pointed to a number of historic clubs in England that have gone out of business this year because they were unable to pay off relatively tiny demands.

“Atletico have been in debt for decades,” pointed out one analyst. “Covid-19 has just exasperated the current debt, that’s all. They’ll continue to pay it off in instalments.

“They use the money from the Champions League and TV, so they’ll never have to sell players. It just means that they still have to be strict with wages.”

Earlier this month, Atletico spent around $12 million on cash-strapped Valencia’s Geoffrey Kondogbia, signed as a replacement for Thomas Partey following the Ghana midfielder’s $59 million move to Premier League side Arsenal earlier this season.

Atletico face the first of two matches that will decide whether they qualify for the knockout stages of the Champions League tomorrow, welcoming reigning champions Bayern as they bid to maintain their two-point gap over third-placed Lokomotiv Moscow in their group. 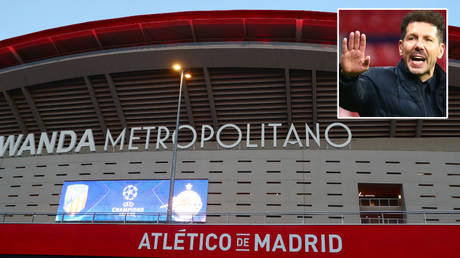