Close
Trending News
HomeSport‘How did he walk away?’ Motorcycle champ flips over top of bike at MotoGP, bounces backside-first on track in horror crash (VIDEO)

‘How did he walk away?’ Motorcycle champ flips over top of bike at MotoGP, bounces backside-first on track in horror crash (VIDEO)

‘How did he walk away?’ Motorcycle champ flips over top of bike at MotoGP, bounces backside-first on track in horror crash (VIDEO)

Moto2 world champ Alex Marquez escaped from a chilling crash during a MotoGP race in Valencia, hurtling over the bars of his bike on a tight turn before bouncing on his backside and skidding off the track at terrifying speed.

Fans watched in horror as the Spanish driver flipped off his vehicle, hit the track, landed again and skidded onto the sidelines before paramedics rushed to help him.

Marquez’s legendary motorcyclist brother, Marc, is currently on the sidelines following a series of operations after he fractured his arm following an accident earlier this year, but his younger sibling stunned viewers by walking away from his second tumble in a week and later returning to action.

“Holy smokes,” said one. “How the f*ck is he walking off, let alone getting back on a bike two minutes later?”

Gear is good #motogp Rider Alex Marquez up on his feet. 😅 pic.twitter.com/zDq5ePag25

Another responded: “Holy b*llocks – that was huge for Alex Marquez, right on his ass. I felt that from here.”

Despite his stomach-churning somersault, the 24-year-old Repsol Honda was back out minutes later.

After hailing his “incredible effort and dedication”, his team announced: “Alex Marquez came straight back in and ends the session in tenth after that vicious highside. [He] is heading to hospital for some precautionary medical checks.”

Should he be deemed fit to resume, Marquez will start Sunday’s race in 20th at the Circuit Ricardo Tormo.

Alex Marquez will feel like he has been on honeymoon with a randy male polar bear with a bucket full of Viagra, tomorrow morning.#MotoGP pic.twitter.com/lCqnIhCivM

That was a big one. Back in the box now. pic.twitter.com/KwWX8Z6xir

Its been well over an hour and I’m still wondering how Alex Marquez walked away from that high side!!!!
Damn!!!

Speaking before practice, Marquez said his aim was to complete a race for the first time in three attempts.

“Without a doubt, finishing the race is a priority,” he admitted. “I am a rookie and I always try to learn and improve.

“Mistakes can certainly happen, such as last Sunday, when I didn’t brake early enough and then found myself on the ground.

“Inside of me, though, I can’t wait to start again and have a good race. It will be an interesting weekend where I will try to be competitive from the first session.” 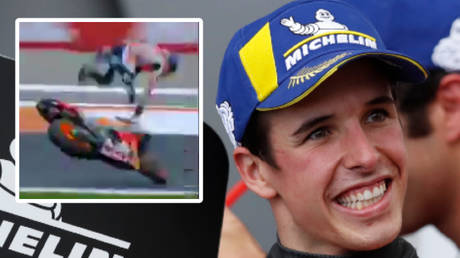