The training is done, they’ve made weight and now Conor McGregor and Dustin Poirier have faced off on stage for the last time ahead of their main event clash at UFC 257 on “UFC Fight Island.”

But in a departure from their first meeting, the tension and bad blood has been replaced with respect and rivalry as the pair have enjoyed a largely cordial fight week in Abu Dhabi.

McGregor has pledged to donate $500,000 to Poirier’s charity, “The Good Fight Foundation,” and the pair have exchanged their own branded goods, with McGregor promising to furnish Poirier with some of his Proper Twelve Irish Whiskey in exchange for some of Poirier’s Louisiana Hot Sauce during Thursday’s press conference.

And Poirier managed to catch McGregor by surprise during their final face-off as he produced a bottle of hot sauce from his pocket and presented it to the laughing Irishman, who shook his hand and posed for photos.

But when it comes down to fight night, both men are laser-focused on victory.

McGregor told the crowd: “It’s great to be back here, I’m delighted I got the Louisiana Hot Sauce. I look forward to bring the hot sauce and the fire tomorrow. Let’s go!

“Thank you so much for the support, everyone. I’m so excited to be back. You’re in for a treat tomorrow night. Let’s go!”

Poirier was every bit as excited and focused for the matchup, as he promised to leave no stone unturned in his pursuit of victory.

“My whole career has aligned me for tomorrow night, and I’m here to be victorious and get my hand raised, by any means necessary,” he said. 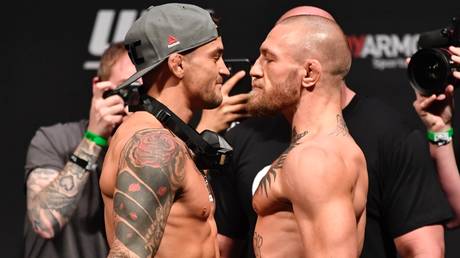