There were worrying scenes in Ajax’s pre-season friendly against Hertha Berlin on Tuesday when Dutch star Daley Blind collapsed on the pitch, leading to fears over the player’s existing heart condition.

The 30-year-old Blind screamed as he dropped to the ground on the edge of the Ajax penalty area during the second half of the match at the Amsterdam Arena.

Footage showed the Dutch international clutching at his chest before falling down and then raising his hand, signaling for assistance.

Horrible to watch. Hope Daley Blind is okay. His heart defibrillator went off during a pre season friendly against Hertha Berlin. pic.twitter.com/A5MoNsjPZn

He was eventually substituted and managed to walk off the pitch, but Ajax boss Erik ten Haag later explained that the disturbing scenes were caused by Blind’s implantable cardioverter defibrillator (ICB) going off.

The footballer was fitted with the device after being diagnosed with inflammation of the heart muscle in December of last year, leading to a two-month spell on the sidelines.

“Daley Blind’s ICD went off. He got subbed off straight away and he is feeling OK now, he is feeling fine. We will do research about this now,” Ten Haag said.

Erik ten Hag: “Daley Blind’s ICD (implantable cardioverter defibrillator) went off. He got subbed off straight away and he is feeling okay now, he is feeling fine. We will do research about this now.” pic.twitter.com/RVDjCZDoKI

The worrying scenes caused concern among fans, with one writing: “The way he pulled down then looks so serious, hope he’s ok!”

Others urged the former Manchester United star to contemplate retirement, given the apparent seriousness of his condition.

“Hope he retires. Surely this isn’t something risking your life over. He’s already had a career that most footballers could only dream of,” read one tweet.

“I have had a ICD for over 10 years and it went off once, I screamed as well, the pain is unbearable,” added another.

Blind will undergo tests on Wednesday, although Ajax will fear another spell out of the team for the versatile star as they prepare for the new Eredivisie season in September.

Blind has made more than 230 appearances across two spells at boyhood club Ajax, whom he rejoined in 2018 after four years at Manchester United.

He has also won 68 caps for the Netherlands, scoring twice. 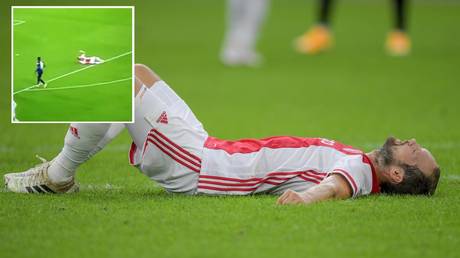