Quarterback Prescott went down in agony after a tackle by Giants defender Logan Ryan in the third quarter at AT&T Stadium, immediately looking in horror at his ankle which had twisted out of place.

Prescott clutched his lower leg and initially appeared to try and shove the dislocated ankle back in place before signaling to the bench as officials and teammates either rushed to help or looked on in anguish.

The gruesome scenes were evident for all to see on television, but apparently not to former Cowboys quarterback Romo, who was calling the action as a color commentator.

“You almost gotta hope it’s a cramp, don’t you, if you’re a Cowboy fan right there,” Romo said despite the horrendous nature of the injury clearly being shown on screen.

“Oh, that… that does not look good Jim,” Romo added, finally realizing the grisly seriousness of the situation.

NFL fans reacted with disbelief at Romo’s initial assessment of the reason why Prescott was stricken and in agony on the turf.

“You just gotta hope it’s a cramp if you’re a Cowboy fan.” Tony Romo says as Dak Prescott’s ankle is hanging in the wrong direction. pic.twitter.com/jYyUHmMAEj

Prescott left the field on a cart and in tears, with the injury later confirmed as being a compound fracture and dislocation of his right ankle.

The 27-year-old underwent surgery on Sunday night and is expected to be out of action for the next four to six months.

The star’s brother, Tad, later tweeted from hospital to vow that Prescott would be back “stronger than ever.”

God is good, and he’ll be back STRONGER than ever. I FUCKING guarante3 IT. Let’s go @dak continue to walk by #FAITH & I’ll make sure you continue to #FIGHT pic.twitter.com/0SWqGJ937h

The Cowboys sealed a thrilling 37-34 win against the Giants after Prescott had been replaced by veteran Andy Dalton, and afterwards owner Jerry Jones paid tribute to the injured star, who had suffered the death of his brother Jace earlier this year when he committed suicide.

“I know the personal hardship and strife that he has faced, dealt with and overcome in his young life,” said Jones.

“And I know of no one who is more prepared, from the perspective of mental and emotional toughness and determination, than Dak Prescott to respond and recover from this challenge that has been put in front of him.

“He is an inspiration to everyone he touches. He has all of our love and support. And we have no doubt that he will return to the position of leadership and purpose that he brings to our team.” 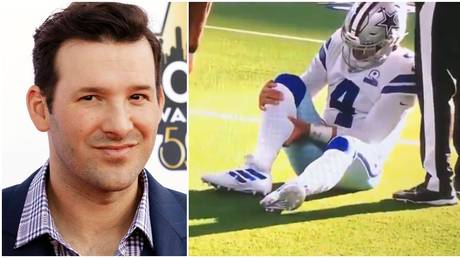