Close
Trending News
HomeSport‘His whole chest was BURNT’: Coach who saved 16yo keeper’s life after he was struck by LIGHTNING describes horror (VIDEO)

‘His whole chest was BURNT’: Coach who saved 16yo keeper’s life after he was struck by LIGHTNING describes horror (VIDEO)

‘His whole chest was BURNT’: Coach who saved 16yo keeper’s life after he was struck by LIGHTNING describes horror (VIDEO)

The football coach who saved the life of a 16-year-old goalkeeper who stopped breathing after he was struck by lightning in training has told of the horrifying moment he ran over to the boy whose “entire chest was burned”.

Ivan Zaborovsky was training with Russian third tier side FC Znamya Truda in the Moscow region when he was struck by a bolt of lightning which caused him to collapse and stop breathing on the pitch.

His life was saved by the quick-thinking of Znamya coach Ivan Basov, who was the first to perform CPR on the boy while awaiting the arrival of an ambulance, upon which paramedics treated the youngster before he was airlifted to a nearby hospital.

Basov gave his first interview since the incident, in which he described the harrowing moment he ran over to an unconscious Ivan whose jersey was on fire and desperately tried to restart the goalkeeper’s heart.

“At that moment I didn’t see the strike. I turned around and Ivan was lying on the ground. Naturally everyone ran over to him straight away. They ran up and began providing help,” Basov told RIA Novosti.

“The clap of thunder was so strong, that everyone around fell over from the shock. I don’t know why but straight away I thought that it was lightning. When I got to him, the first thing I did was roll him over, his whole jersey on his chest was burned. At that moment I understood that it was lightning.”

The sudden jolt of around one billion volts of electricity to Zaborovsky’s system forced him to stop breathing, but Basov’s emergency resuscitation on the pitch managed to kick start the teenager’s heart, which saved his life.

“For maybe two minutes or less he stopped breathing. Then after we gave him CPR, he started to breathe again, and I felt that his heart began to beat again, he had a pulse,” Basov explained.

A clip of the moment the lightning struck Zaborovsky went viral with many football fans reacting in amazement, horror and worry after seeing the snap of lightning cause him to collapse in a heap to the ground in a cloud of black smoke.

Basov admitted that he only saw the video of the moment the lightning hit when police arrived on the scene and began questioning those present.

“The police arrived, and questioned us all, and I watched the video of the strike and the entire situation for the first time. It defies logic! Things like this happen once in 100 years, maybe even more. But it happened to us. Unbelievable,” he said.

Upon reaching hospital, Zaborovsky was placed into a medically-induced coma and placed on artificial breathing apparatus. A few days later his father announced his son had regained consciousness, was responding to commands and that he would play again.

The plucky youngster himself phoned Basov to thank him and himself said he was willing to return to training just three weeks after the incident. 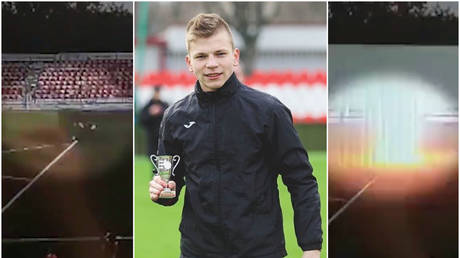