Cristiano Ronaldo found the net for the fourth time in three games since his return to Manchester United as the forward helped his team to victory in an incident-packed clash with Premier League rivals West Ham.

United found themselves behind after 30 minutes at the London Stadium when Said Benrahma’s strike deflected off Raphael Varane and beyond David De Gea.

Ronaldo’s first flicked effort from the outside of his boot was spilled by West Ham goalkeeper Lukasz Fabianski, but the poacher tapped in the rebound from close range.

The goal was cleared following a VAR review for potential offside, and replays showed Ronaldo had used all his guile to time his run to perfection.

Ronaldo is initially inactive but he then sees Bruno shape to cross & immediately darts in-behind whilst staying onside. The intelligence & timing of his movement in the box remains phenomenal. pic.twitter.com/FKqGzAjQfA

66 – West Ham’s London Stadium is the 66th different stadium that Cristiano Ronaldo has scored at in matches played in Europe’s big five leagues, scoring at more unique venues than any other player since his Man Utd debut in 2003-04, ahead of Zlatan Ibrahimovic (64). Conqueror. pic.twitter.com/64uJF3SeZp

The strike was Ronaldo’s third in the Premier League since returning to United in a sensational transfer from Juventus in the summer and added to the double he struck against Newcastle in his Old Trafford homecoming last weekend.

The star number seven was also on target in United’s shock Champions League defeat to Young Boys in Switzerland on Tuesday.

Cristiano Ronaldo has scored in:

Ronaldo thought he had put United in front early in the second half against West Ham, but saw his effort superbly saved by Polish stopper Fabianski as he went some way towards making amends for his earlier fumble.

As West Ham pressed, Ronaldo was left furious at the other end when he was denied a 77th-minute penalty appeal after going down under contact from Vladimir Coufal.

The decision sparked avid debate online, with some claiming it was a stonewall spot-kick and others claiming Ronaldo had “milked it”.

This is Ronaldo’s first dive in the Premier League

Penalty, yes or no? pic.twitter.com/WFrSlQXBAf

I’m clearly blind. Coufal sticks his leg out, doesn’t get the ball, and so clashes with Ronaldo’s knee. How’s that not a pen? 😂

Would be a little harsh, but at the same time Ronaldo has done Coufal, he’s left a lazy leg and caught him – should be a penalty

This is the moment of contact. Ronaldo is in the air, two feet off the ground, diving into Coufal. It’s clumsy defending, but the contact is initiated by the forward, trying to win a penalty. Again, this is EXACTLY what the PL has highlighted that they want to remove pic.twitter.com/bLerBPsDYJ

Referee Martin Atkinson waved play on, much to the disbelief of Ronaldo, who also went down under contact from Angelo Ogbonna when attempting to get on the end of a cross in the West Ham box not long after, although on that occasion there appeared far less cause for injustice.

How many times will Ronaldo dive in this game to get a penalty 😭😭
pic.twitter.com/vr6fWM3plq

Those complaints were forgotten one minute from time when Jesse Lingard hit a superb effort against the club he spent part of last season on loan at.

Cutting in from the right, the England international unleashed a rasping drive into the top corner to seemingly set United on course for all three points.

⚽️ Jesse Lingard has scored in successive PL apps for Man Utd for the 1st time since Dec 2018 (Mourinho’s last game, Solskjaer’s 1st) – he did score in 5 in a row for West Ham last season pic.twitter.com/yAOtuDFxys

It was also personal redemption for Lingard after his shocking error gifted Young Boys victory in mid-week.

But there was still time for Ronaldo to see another penalty denied as he went down under contact from former Chelsea defender Kurt Zouma, again with a seemingly strong shout for a spot-kick.

It’s a horrible challenge but Ronaldo tried to sell it and ref didnt buy, if he would’ve just let Zouma run into him naturally instead of lunging forward before contact, it’s a clear PK pic.twitter.com/E4tWtQGGJO

Ronaldo got pushed, Zouma did not get the ball but got the player = no penalty 😂 pic.twitter.com/kf1XRD0rGv

Yes. This should have been a penalty. I watched this a few times and it appears that Zouma pushed Ronaldo’s back as he went in for the tackle. He didn’t dive this time pic.twitter.com/TET8WxzzlF

— Has the Referee or VAR made a poor decision? (@PoorEPLreferees) September 19, 2021

Remarkably, the drama was not done there as the hosts were awarded a penalty at the other end when a cross struck the outstretched arm of Luke Shaw.

Hammers skipper Mark Noble – who had only just stepped onto the pitch as a late substitute – saw his effort saved by a brilliant dive from De Gea to his left.

WHAT AN END TO THE GAME 😳 pic.twitter.com/IFmhyANnjK

The dramatic win lifted United to second in the league, level with Liverpool on 13 points and with four wins and one draw from their five games. 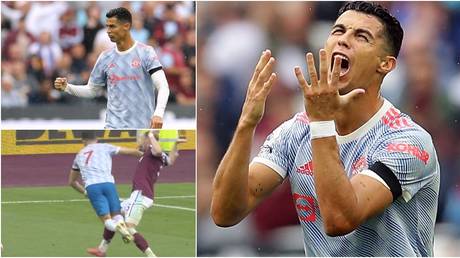 First one out: Newcastle’s Sau...