‘He’s well enough to talk about the fight’: Russian-born ‘warrior’ leaves hospital after horror knockout out in brutal boxing epic

‘He’s well enough to talk about the fight’: Russian-born ‘warrior’ leaves hospital after horror knockout out in brutal boxing epic

Ivan Baranchyk, the welterweight who was part of an incredible boxing match at the weekend that saw him crumpled to the canvas in the last of eight knockdowns, has been pictured smiling after being allowed to leave hospital.

Former IBF light-welterweight champion Baranchyk spent more than a minute prone in the ring while he was attended to by medics after his epic scrap with Jose Zepeda in Las Vegas, where he needed support to leave the venue after eventually being helped to his feet.

As well as lauding the bout as a fight of the year contender, several analysts described Baranchyk’s chilling knockdown as “scary”, and ex-title holder Tim Bradley warned that the Russian-born Belarusian had left “a piece of him” in the ring that he would “never get back”.

Veteran promoter Lou DiBella has now issued a welcome update on brave Baranchyk’s condition, sharing a photo of the fighter in a car with fellow promoter Tony Holden while calling him a “bruised but grateful warrior”.

“He lost a brutal, unforgettable match,” added DiBella. “Thankfully, he’s well enough to talk about – and appreciate – the fight of 2020 with family.”

There had been little sign of the danger that was to come as Baranchyk, who had never been knocked out in his 21 professional fights before, sent the experienced Zepeda to the floor twice in the first round.

Both fighters scored a knockdown in the second before Zepeda decked Baranchyk twice in the subsequent two rounds to continue the thrilling pace of the contest.

Zepeda took a count in the fifth round, only to rise and find a devastating final shot to leave Baranchyk flat out with his right leg underneath his torso.

Leaving the hospital with our co-promoter, Tony Holden, is bruised but grateful warrior, Ivan ⁦@IBaranchyk⁩. Last night, he lost a brutal, unforgettable #boxing match. Thankfully, he’s well enough to talk about, and appreciate, the fight of 2020 with family. God is good. pic.twitter.com/ZeQZmXovJs

Lou, so glad to hear he is foing ok… I am so angry with the lack of assistance to Ivan last night.. boxing must learn ASAP.. Oxygen HAS to be ringside.

I have to admit that I was surprised with some of what I saw last night at ringside. Need to get some more info.

Viewers expressed their admiration for Baranchyk in response to DiBella’s tweet. “Glad [he] is heading home from the hospital after being part of 14 minutes and 50 seconds of raw aggression in a memorable fight that will go down in boxing lore,” said one.

“Ran the gamut of emotions from the adrenaline of a one punch knockout to the concern for his well-being.”

DiBella admitted that he was worried about the level of medical assistance that had been available to Baranchyk at the MGM Grand Conference Center.

“I have to admit that I was surprised with some of what I saw at ringside,” he told a fan who expressed their anger at an apparent lack of ringside oxygen.

Took long enough to remoner his gumshield, basically waited for him to come round. Poor.. has to be better than that.

Agree. I was watching the stream. Didn’t see paramedics or oxygen. There seemed to be way too long a time without paramedic aid in the ring.

Most definitely.. again, im glad he is good but that was not good to watch that 3 mins or so. As a community i have seen many saying the same. These fighters deserve the best possible care if we want them to fight like that.

“Need to get some more info. I was watching the stream [and] didn’t see paramedics or oxygen.

“There seemed to be way too long a time without paramedic aid in the ring.”

Zepeda seemed shocked by the severity of the damage inflicted by both men. “It was a hard fight, and I’m thinking: ‘Man, boxing is hard. It’s no easy game,'” he reflected after his win.

“Both of us are climbing up, and somebody had to stay.

“I was able to win the fight, and I told him: ‘Thanks for the fight. It was a great fight.’

“I know I’m tough [but] I didn’t know how tough I was. Tonight, I showed myself, too.

“I’ve never been in a fight like this – it was a great learning experience.” 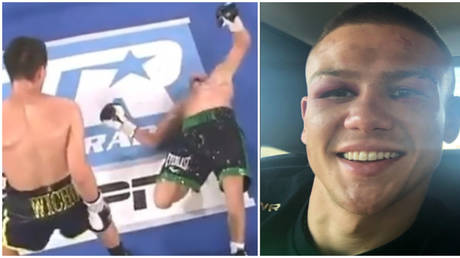