Close
Trending News
HomeSport‘He’s the only opponent who’s ever p*ssed me off’: Greek ace Tsitsipas on Russian rival Medvedev as pair prepare for US Open

‘He’s the only opponent who’s ever p*ssed me off’: Greek ace Tsitsipas on Russian rival Medvedev as pair prepare for US Open

‘He’s the only opponent who’s ever p*ssed me off’: Greek ace Tsitsipas on Russian rival Medvedev as pair prepare for US Open

World number six Stefanos Tsitsipas says Russia’s Daniil Medvedev is the only player to have “p*ssed him off” during a match as the Greek touched on the pair’s heated rivalry.

Tsitsipas, 22, and fellow top-10 star Medvedev, 24, are both tipped as Grand Slam winners having emerged with the crop of Next Gen talent bidding to overthrow the ruling triumvirate of Novak Djokovic, Rafael Nadal and Roger Federer at the top of tennis.

But the temperamental duo have endured a tetchy relationship during their rise, stemming from their first senior meeting at the Miami Open in 2018.

Tempers flared after that match – which the Russian won – when Medvedev squared up to Tsitsipas and accused him of calling him a “bullsh*t” Russian, telling the Greek to “shut your f*ck up.”

Tsitsipas later branded Medvedev “boring” and claimed his playing style was dull to watch and tedious to play against.

Both players have since suggested that hostilities have cooled, but when asked this week by a fan on Instagram about his relationship with the big Russian, Tsitsipas admitted that Medvedev had got under his skin like no other opponent.

“It’s probably the only time in my life when I got p*ssed off during a match with my opponent,” Tsitsipas said, then adding diplomatically: “but let it all be in the past, let’s just forget it and move on.”

Adding to Tsitsipas’ frustrations, Medvedev won the first five of their ATP meetings before the Greek finally got on over on his rival at the ATP Finals at the end of last year.

The next meeting between the two could come at the US Open, which kicks off at the end of the month in New York.

Both men will play at Flushing Meadows despite a number of high-profile withdrawals from the men’s and women’s draws due to Covid-19 concerns.

Medvedev came close to clinching a first Grand Slam title at last year’s event, falling to Rafael Nadal in a five-set thriller in the final.

Along the way to that meeting, the Russian had waged an on-off war with the Flushing Meadows crowd, earning himself a label as a villain before making peace with supporters during the latter rounds.

Medvedev is set to be seeded third in this year’s tournament – behind world number one Novak Djokovic and Austrian ace Dominic Thiem – while Tsitsipas is likely to be one place lower in fourth. 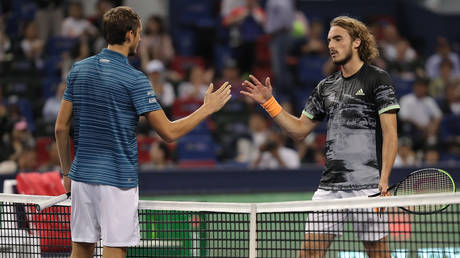 Shops, businesses and traffic all...