Gareth Bale’s Real Madrid priorities have been called further into question as the Welsh winger was filmed jokingly using his face mask to take a nap in the stands as his team took on Alaves.

Bale was an unused substitute as Real recorded a 2-0 win at the Estadio Alfredo Di Stéfano thanks to goals in each half from Karim Benzema and Marco Asensio, restoring their four-point lead over Barcelona in the La Liga standings and leaving Zinedine Zidane’s team just two wins from clinching the title.

For Bale, however, it was a languid evening in the late Madrid sunshine as he watched the game from the stands, social distancing with his fellow substitutes.

The star, who picks up a reported €400,000 a week, was so relaxed that at one point the cameras captured him putting his feet up and turning his mask into a sleeping aid, as he jokingly pretended to take a mid-match snooze.

Gareth Bale gets paid €15M per year to do this, ultimate shithousery pic.twitter.com/Sp1kyTLlmy

Bale has endured an increasingly tetchy relationship in recent seasons with Madrid fans who accuse him of a lack of commitment due to his long-running injury woes and supposed priorities of representing his country and playing rounds of golf.

As the images of Bale snoozing started to circulate online, some praised the 30-year-old Champions League hero for the ultimate flex on disgruntled fans of his team.

This guy is really living his best life! 😭pic.twitter.com/PWNElp9pHS

Unsurprisingly however, the Madrid fan accounts failed to see the funny side, lampooning the winger for “insulting” the club.

Very disrespectful from Gareth Bale. It is clear he doesn’t want to be a part of the club anymore.

His performances have been terrible of late (when he has played), don’t blame Zidane for not playing him. Other players have been far better

It is better for Bale if he moves on. pic.twitter.com/AWVBk9YliL

Bale appeared to make his carefree attitude even clearer when he was seen laughing on the sidelines as Zidane made his fifth and final substitution, meaning the Welshman would not need to break a sweat on that particular evening.

MARCA’s Rubén Jiménez: “Does Bale intend to laugh in the stands until 2022? Doesn’t he have desire for football or revenge? If you don’t adjust wages to current situation & look for a team to play then you agree with those who say Gareth’s time at Real has been disappointing.” pic.twitter.com/NiustCZni4

Bale is under contract at Real until the summer of 2022 but was on the brink of a move to China last year when his relations with Zidane appeared to reach breaking point, although he ultimately remained at the club which he has helped to four Champions League crowns.

Relations have not improved this season as Bale has made just 16 appearances in the league, scoring twice.

But that has not stopped Zidane’s team from moving to within touching distance of a first La Liga title in three years and only their third in the last 12 seasons, as they racked up an eighth consecutive victory on Friday. 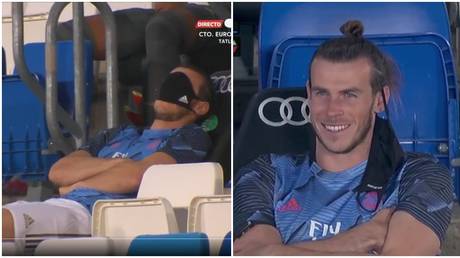