‘He’s not using it in a derogatory manner’: Former opponent DEFENDS Tyson Fury following use of ‘N-word’ in Instagram vid (VIDEO)

‘He’s not using it in a derogatory manner’: Former opponent DEFENDS Tyson Fury following use of ‘N-word’ in Instagram vid (VIDEO)

Tyson Fury feels that gypsies in his native UK suffer the same discrimination as black people in the US, Steve Cunningham has revealed while reacting to a row over his former opponent’s use of the word “n****r” on social media.

Fury has been called out by politically correct critics on social media after singing along to the track “Juicy” by Biggie Smalls while celebrating his 32nd birthday at home with his family earlier this week.

The heavyweight champion then played the song by the late rapper in the background as he publicly sparred on a beach in Morecambe in his home county of Lancashire.

Former cruiserweight champion Cunningham revealed that he received messages asking whether he believed the man he sent to the canvas at Madison Square Garden had sung the inflammatory lyrics because of prejudice.

“People have been asking me, ‘What do you think? He’s a racist,'” Navy veteran Cunningham told his thousands of followers on Twitter, speaking in a gym.

“This word is in every rap song. He’s reciting a song, he’s not using it in a derogatory manner.”

Some fans mentioned Fury’s heavyweight rival, Anthony Joshua, who was accused of encouraging people to boycott shops owned by white people in a speech at a Black Lives Matter protest in June.

“F*cking hell, Tyson Fury is really out here saying the N-word?” asked one.

“But AJ is the problem, yeah? My heavyweight champ would never do that.”

Birthday morning with the family. Got to love it 😍 2020

Fury had claimed that he would have been “crucified” if he had told people not to “shop in black-owned stores.”

Cunningham said that he had spoken with Fury about discrimination during a heart-to-heart at a training camp ahead of his canceled fights against former heavyweight champion David Haye in 2013.

“He told me about his people, gypsies,” explained the 44-year-old American.

“That’s the word he used.

“When he said that, it didn’t shock me. It just helped me understand it even better. I didn’t know anything about travellers, gypsies, any of that.”

Lol @Tyson_Fury trolling with Juicy playing in the background after yesterday lol what a man never change 👑👑 https://t.co/9jj2WrR223

One viewer warned: “What I’m concerned about is Tyson fury dropping the N-word comfortably in front of children.

“Those kids will think it’s perfectly fine to use the word since daddy can use it.”

Another argued that the footage did not “automatically make him racist” but added: “He’s old enough to know not to say it.”

Among Fury’s defendants, one said: “People are moaning about Tyson Fury saying the n-word while singing ‘Juicy’. Where’s the anger and controversy when 20 whites girls are screaming it at a house party?”

Cunningham received praise for his response. that was legit a surprising response. “He should know better but at the end of the day it’s a word that has been used so often,” said one fan.

Those kids too will think it’s perfectly fine to use the word since daddy can use it!!

He’s old enough to know not to say it, doesn’t automatically make him racist though

People Moaning about @Tyson_Fury saying the N word whilst singing “Juicy” where’s the anger and controversy when 20 whites girls are screaming it in a house party ?

“What does it really mean now? It’s used as a greeting, expression and everything in between.”

A Biggie Smalls enthusiast said: “Finally some common sense. How can someone complain about someone singing a song?

“I love rap and hip hop, I sing the songs. It’s a compliment to the artists.”

Promoters MTK Global, heavyweight contender Joseph Parker and Manchester United striker Jesse Lingard were among those wishing Fury a happy birthday in reply to his video.

Cunningham stunned Fury by knocking his larger opponent down in the second round when they fought in 2013, only for the giant future heavyweight king to recover to knock him out in the seventh round.

He has since won and lost the USBA heavyweight crown and challenged for the WBO cruiserweight title, last fighting in August 2017, when he failed to win the NABF cruiserweight belt on a decision. 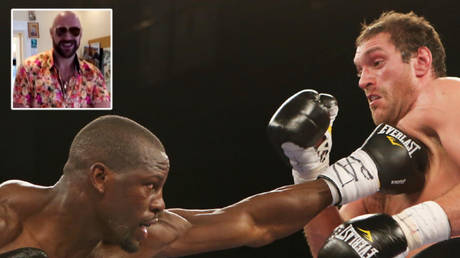