Close
Trending News
HomeSport‘He’s lost his MIND’: Rival is sent off after MASSIVE meltdown with referee as Hazard finally bags in Champions League for Madrid

Eden Hazard summoned a moment of brilliance to earn and score a penalty for his long-awaited first Champions League goal for Real Madrid, but a moment of madness will steal the headlines after Arturo Vidal’s baffling sending off.

Three years and three days after his last Champions League goal, $115 million playmaker Hazard scored for the first time in the competition for the club he joined almost 18 months ago from Chelsea.

Reminding fans of the trickery that made him one of the most sought-after players in the world, the Belgium magician worked his way out of a tight position on the left-hand byline with less than five minutes played, then exchanged a slick one-two before drawing a foul from Nicolo Barella.

Hazard’s goal looked like taking the limelight before an extraordinary loss of composure from Arturo Vidal, forcing English referee Anthony Taylor when he was booked twice in seconds after suffering a complete meltdown inside the penalty area.

Vidal with an absolute meltdown.

Takes a dive in the box in the 32nd minute. Yellow card for dissent. Squares up and flexes on the ref for the immediate second yellow.

Still on the field minutes later arguing and having to be talked off by players on both teams.

VIDAL RED CARD INJECT IT IN MY VEINSS

Chile winger Vidal, who only joined the club two months ago, was incensed after he appeared to be booked for diving when he took a tumble in front of goal, resulting in the 33-year-old remonstrating furiously with Taylor.

His reaction earned Vidal one of the quickest double-bookings in history as he appeared to square up to Taylor, becoming increasingly emotional and holding his head in his hands after the fiery exchange.

“Vidal is one of the most stupid players I have ever seen,” wrote one fan as Madrid’s departing protestor stayed on the pitch for several minutes to angrily argue with the man in the middle and several players who tried to drag him away.

vidal should retire after this what a clown class

Arturo Vidal just got a yellow for diving and a yellow for dissent in a few seconds, except he very clearly didn’t dive and it’s an obvious penalty. What is a beautifully dumb sport and moment.

Vidal has lost his mind

“The referee clearly indicates that VAR is checking it and he continued to scream at the referee.”

Taylor’s check on the penalty came to nothing as Vidal eventually left the pitch, and he is likely to face further action for squaring up to the official just as UEFA have been offering fans more insights into the kind of challenges referees can face.

Vidal’s former teammate, Lionel Messi, is among those shown in a short film series, with the striker being advised to stop time-wasting during Barca’s 4-0 defeat at Liverpool two seasons ago.

HAHAHAHAHAHAHA! Vidal is the biggest idiot in the history of football.

Arturo Vidal hasn’t liked Real Madrid in a long time and seemed a bit triggered throughout this first half. Just got a second yellow card for dissent.

Inter down one goal and down to 10 men before the end of the first half.

How is started Vs How it ended

Disgraced Vidal now has the ignominy of being sent off for three different clubs in the Champions League, having also lost his head while playing for Barca and current holders Bayern Munich.

He joins former World Cup winner Patrick Vieira and Sweden legend Zlatan Ibrahimovic as one of only three players to have achieved the unwelcome feat, and even appeared to be sitting on the floor contemplating his actions after leaving the field.

Madrid did not seem unduly troubled by Vidal’s dismissal, scoring again in the second half to secure a vital win that left them second in the group and with their places in the knockout stages in their hands. 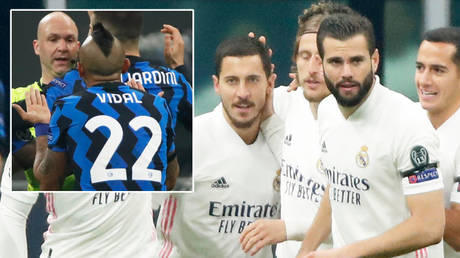