Russian heavyweight prospect Arslanbek Makhmudov is targeting WBA, IBF, WBO, and IBO champion Anthony Joshua after he secured his 11th consecutive knockout victory in a row on Saturday, according to his promoter Camille Estephan.

The 31-year-old extended his professional record to 11-0 as he knocked out Dillon Carmanwith just 27 seconds on the clock in the first round to defend his WBC-NABF heavyweight title.

“Arslanbek is going to instill fear in the heavyweight division I believe,” his promoter Estephan told Sky Sports ahead of the fight

Before turning pro, ‘Lion’ was a top contender in the World Series of Boxing, in which he enjoyed a 12-fight winning streak.

Whilst competing in that series, he recorded a one-punch knockout of Mihai Nistor, the last fighter to KO Joshua at amateur level.

Estephan and the fighter’s coach, Marc Ramsay, are convinced the fighter has what it takes to challenge the world’s top heavyweights, including Joshua, Tyson Fury and Deontay Wilder.

“Marc Ramsay his coach is very conservative usually in his assessments but has told me a few months ago: ‘Camille, we’re ready for anybody in the top five. Any of the champions, we’re ready. We need maybe two, three fights, a bit of experience under the lights and we’re ready.’

“I think Arslanbek is probably the best prospect in the mix in my eyes and if you put him against Joshua, against Fury, or against Wilder, it’s going to be a tough fight for all of them.”

After his win over Carman, one Twitter user agreed with Estephan’s assessment that the Russian is superior to his fellow prospects, while another suggested he could beat Wilder.

Makhmudov has the firepower to beat Wilder, imo.

Makhmudov has made light work of virtually every fighter he’s faced since turning professional.

Of his 11 fights, he has ended eight of them inside the first round.

The only fighter to make it past the third round against him is Jonathan Rice, who lasted until Round 7 when they went head-to-head in the ring last year for the vacant WBC Continental Americas heavyweight title.

Of the top heavyweights currently competing in the division, Estephan said Joshua is the one he would most like to face off against.

“You’re going to see him wherever there’s a belt we can take,” he said.

“We’d love to fight in England.

“Absolutely, that would be the [Joshua] fight that we would want. If you were to ask me who we would want to fight between Wilder, Fury and Joshua? Joshua, his marketability, I honestly believe Makhmudov knocks him out.”

He added: “I think it will be a fight that we will see at some point soon in the future.”

Joshua holds four heavyweight titles while Fury has the WBC and The Ring belts.

The former regained his titles last December after losing them in a shock upset against Andy Ruiz Jr. six months prior.

He is set to put them on the line next against IBF mandatory challenger Kubrat Pulev, with their fight expected to take place this December after it was postponed from June due to the pandemic. 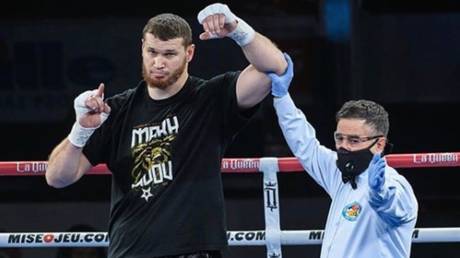 This one's for Abdulmanap: Ta...