World no. 1 Novak Djokovic had a moment to forget in his French Open clash with Russia’s Karen Khachanov on Monday as he accidentally hit another line judge with the ball.

Djokovic was disqualified from the US Open last month when he inadvertently struck a lineswoman in the throat, after hitting a ball away in frustration during his fourth-round tie with Pablo Carreno Busta.

The 33-year-old, competing at the same stage at Roland Garros, had another heart-in-mouth moment when he attempted to return a serve from Khachanov, but the ball clipped the frame of his racket and went straight into the face of a nearby official.

Khachanov looked back to see if he can get an easy win #rg20 pic.twitter.com/xp4SL0mmiR

The incident was even less intentional than the accident that caused him to be ejected at Flushing Meadows, so there was no risk of another default, but it nevertheless sent fans into hysterics on social media.

“Not again,” said one fan, who added: “Anyone ever been disqualified from back to back Grand Slams?”

“You cannot make this up!” exclaimed another, while one spectator suggested the line judge “needs the helmet more than the mask when Nole is playing.”

Anyone ever been disqualified from back to back grand slams? 😂😅

You cannot make this up!

The gaffe also comes after the Serbian suggested line officials be replaced by technology.

“The technology is so advanced right now, there is absolutely no reason why you should keep line umpires on the court. That’s my opinion,” Djokovic said, per Sky Sports.

“Of course, I understand technology is expensive, so it’s an economic issue and a question mark. But I feel like we are all moving towards that, and sooner or later there is no reason to keep line umpires.”

After his latest unfortunate brush with a line judge, he likely believes such a change can’t come soon enough. 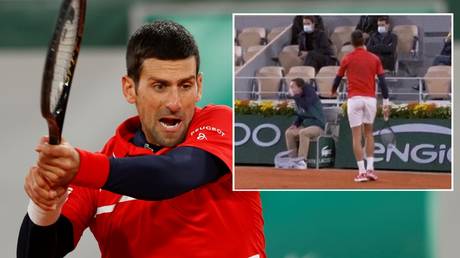