Close
Trending News
HomeSport‘He’s been doing this for a long time’: Carreño Busta lambasts Djokovic for calling medical time-outs when game gets tough

‘He’s been doing this for a long time’: Carreño Busta lambasts Djokovic for calling medical time-outs when game gets tough

‘He’s been doing this for a long time’: Carreño Busta lambasts Djokovic for calling medical time-outs when game gets tough

Spanish tennis player Pablo Carreño Busta who was beaten by the Serbian legend Novak Djokovic in the quarterfinal of the French Open, has suggested his opponent intentionally called a medical time-out after the lost set.

The Spaniard claimed the world number-one player always uses that trick when facing tough resistance from his rivals.

“Every time the game gets complicated, he asks for medical assistance. He’s been doing this for a long time,” Carreño Busta said after the match.

“He didn’t surprise me [by asking for a medical time-out]. It was a good thing. It was a sign that he was losing and that I was playing well, because he always does that,” Carreno Busta said.

The Spaniard goes on to take the first set 6-4 over the World No.1.#RolandGarros pic.twitter.com/bOuJNVqa9o

“Every time the match gets complicated, he asks for medical assistance. It’s something that he has been doing for years. When he is down, he asks for a medical time-out,” the player added, noting that injuries stopped bothering Djokovic when he started winning.

The top-seeded Djokovic wore a bandage around his neck during the match and had troubles with his left arm, calling a medical time-out to ease the pain.

The 17-time Grand Slam winner lost the game-opener against Carreño Busta 4-6 before winning the three following sets 6-2 6-3 6-4 to book a spot in his 10th French Open semifinal.

This was a rematch from the US Open, when Djokovic was sensationally disqualified in the fourth round after a ball hurled by him in frustration hit a line judge in the throat.

The Serb will now face off against Greece’s Stefanos Tsitsipas, who defeated Russia’s Andrey Rublev in his respective quarterfinal. 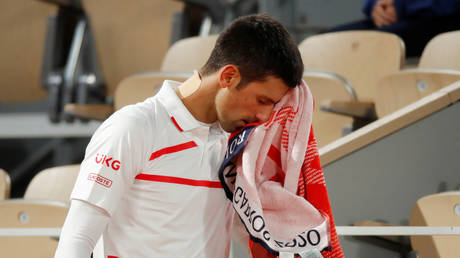