Australia’s Volkanovski is in action in the night’s co-main event, when he puts his 145-pound title on the line against the man he defeated to win the belt at UFC 245 last December, Hawaii’s former champion Max Holloway.

But, in between questions about his upcoming title rematch on Saturday night, Volkanovski also revealed that he thought Russian star Yan would defeat UFC legend Jose Aldo and capture the bantamweight title in the bout that precedes his on the stacked UFC 251 fight card this weekend.

“That’s going to be a very competitive (fight),” Volkanovski explained.

“I know Petr Yan and he’s a gamer. He’s a special fighter and I find it hard for Aldo to be able to keep up with that pace.

“I think it’s going to be pretty competitive early, but Petr Yan’s pace is just going to end up taking over in the later rounds.”

Yan is undefeated in the UFC and his only career loss came in a controversial split-decision defeat at ACB 32, when a highly-debatable yellow card issued to him for a supposed headbutt cost him his undefeated record against Magomed Magomedov.

He later avenged that defeat by taking Magomedov’s unbeaten record and winning the ACB bantamweight title before eventually signing with the UFC.

Since signing for the world’s biggest promotion, Yan has gone 6-0, with notable wins over contender Jimmie Rivera and a knockout of UFC and WEC legend Urijah Faber.

Victory over another legend in Aldo will see him become a UFC world champion this weekend. And he clearly has the support of Volkanovski, who hopes to finish the night with his UFC belt intact. 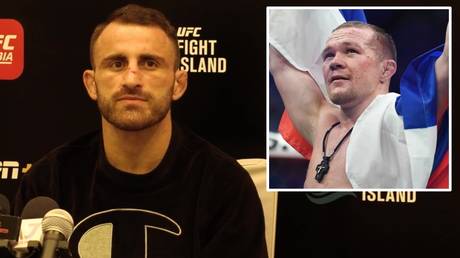