Joaquin Buckley, the UFC welterweight who went viral for his spinning back-kick knockout and won a new fan in pop star Kanye West, is a “clown” who would “get it”, according to “UFC Fight Island” winner James Krause.

Buckley stole the headlines for a sensational knockout victory against Impa Kasanganay a week ago, picking up an unexpected supporter in West, who released a song paying tribute to the middleweight.

Now Krause, who beat Claudio Silva by a unanimous decision at the Flash Forum Arena on Saturday, has launched into a tirade against Buckley, claiming that the pair fell out after he turned down a request by Buckley to visit his gym for training.

“The dude’s a clown, man,” Krause told reporters after his victory. “Listen, this dude – people just know him from his viral video, for his viral knockout.

“The dude’s a sh*tbox. He’s from my neck of the woods and all he does is sit on social media and talk sh*t all day.

“He called me to come train and I told him to get f*cked.”

Krause was in an unforgiving mood after returning to welterweight to beat Claudio Silva in Abu Dhabi, warning that he could head back up to middleweight to punish Buckley.

Despite admitting that Buckley’s knockout had been “beautiful”, he was clearly unimpressed with what Krause perceived as attention-seeking behavior.

Damn so Krause and Buckley got BEEF beef. I’ll watch that fight any day of the week! https://t.co/6jW1Xw2vOI

Some fans joked that Krause was jealous of Buckley’s new-found fame, while others felt that his greater experience would make him a clear favorite to fare considerably better than the floored Kasanganay should he meet Buckley in the octagon.

“I honestly think Krause runs circles around Buckley,” said one.

“The only X-factor is the immense size of Buckley. And that kick he pulled out of nowhere.”

I honestly think Krause runs circles around Buckley. Only X-factor is the immense size of Buckley……and that kick he pulled out of nowhere lol.

Krause mad Buckley has more followers on IG now than him

I think Krause would stop Buckley in the 1st or 2nd

Weird how this comes out after he’s getting a lot of hype isn’t it? Seems like Krause just wants to get his name connected to Buckley’s

Krause, who beat Silva on 12 days’ notice and has won 28 of his 36 professional fights, agreed with their assessment.

“I’ll go back up to middleweight and whoop his ass,” he pledged. “I don’t give a sh*t.

“Normally, I need only 24 hours to go up to middleweight. He can get it, though.

“We can figure this out, no problem. I know he’s got a fight set but I’ll go back up middleweight for that. No problem. Easy work.” 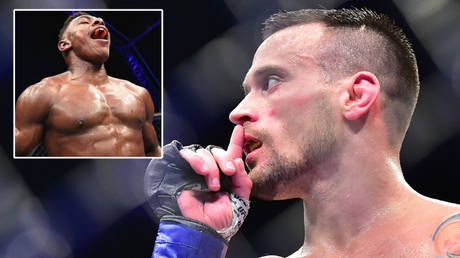 China’s oil imports are falling as...