Close
Trending News
HomeSport‘He’s a ONE-DIMENSIONAL fighter’: Lennox Lewis says he would have beaten Mike Tyson in his legendary prime

‘He’s a ONE-DIMENSIONAL fighter’: Lennox Lewis says he would have beaten Mike Tyson in his legendary prime

‘He’s a ONE-DIMENSIONAL fighter’: Lennox Lewis says he would have beaten Mike Tyson in his legendary prime

Mike Tyson may be capturing the imagination of the boxing world ahead of his much-anticipated return against fellow legend Roy Jones Jr, but his boxing skills don’t impress another great of the fight game.

Former undisputed heavyweight champion of the world Lennox Lewis defeated Tyson during the Brit’s prime, but at that time, “Iron Mike” was on the downslide, as Lewis demolished him with relative ease after an ill-tempered build-up.

The difference between the pair, according to Lewis, was a gap in boxing class, as the former three-time champion explained on UK daytime TV show, Good Morning Britain. He even went as far as to say that he would have beaten Tyson during his destructive prime, when he demolished a host of opponents in devastating fashion.

“Mike Tyson is a great guy in one sense. I knew him when he was younger. I went up to spar with him after the junior world championship where I won a gold medal and his team were saying I didn’t box the best guy.

“Me and my trainer at the time, Arnie Beam, drove to Catskills and met him.

“He took me to his room, he was nice, we looked at lots of old films and he was more into boxing at the time than I was. He knew all the old guys and all the different techniques of boxing.

“So I grew to really like and know him when I was an amateur, but then when he went into his pro career I never really knew why he was acting like that.”

And, when the pair were eventually matched to fight in 2002, Lewis encountered a man who differed little from the man he encountered as a teenager.

Lewis won the matchup with consummate ease, using his slick boxing skills and educated jab to retain his title via eighth-round knockout.

One of the reasons behind Lewis’ win, he said, was the lack of evolution in Tyson since their early meeting.

Now aged 54, Tyson will return to the ring to face fellow legend Jones Jr, 51, later this month in an exhibition bout. 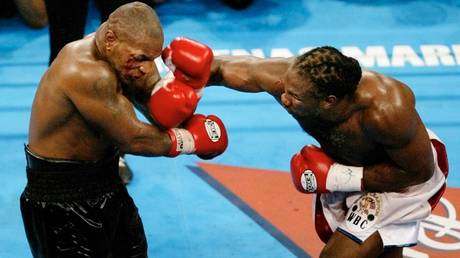