Arizona Cardinals star DeAndre Hopkins showed why he is known for being one of the league’s most cool-handed wide receivers when he caught Kyler Murray’s 60 yard Hail Mary to claim a last-second win against the Buffalo Bills.

Hopkins, who is in his first season in Arizona since his highly-publicized trade from the Houston Texans this past offseason, has developed a productive partnership with last year’s first pick in the NFL Draft Murray throughout his time with the Cardinals – and that was on full display late against the AFC East pacesetters, the Bills, on Sunday.

Murray, down four points in the final play of the game, took the snap and scrambled away from the Bills’ defense before launching a deep bomb towards the endzone. Hopkins rose highest, snagging the ball away from the hands of the Buffalo defensive backs as the clock elapsed, handing his side a two point win.

It was probably the most spectacular catch of a career littered with moments like this for the 28-year-old Hopkins.

“Never panic,” he wrote on Twitter afterwards, with the win taking his team top of the NFC West.

Several of the sports world’s biggest names also joined in the reaction, with LeBron James hailing Hopkins as “different” while Patrick Mahomes said that the star wideout is a “monster“.

@DeAndreHopkins is a monster man!!!

The last-second loss will be especially tough to take for the Bills who had just completed a 12–play, 73-yard drive to take the lead late in the game and means that they fall to 7-3 on the season, one win ahead of the Miami Dolphins and three ahead of the stuttering New England Patriots, who decisively beat Super Bowl contenders the Baltimore Ravens in Sunday’s late game.

The clear talking point, though, from Sunday’s late window of games was Murray’s deep pass to his star receiver in Hopkins, and how that ever-developing relationship between the team two best attacking threats looks set to deliver Arizona’s most successful season in some time. 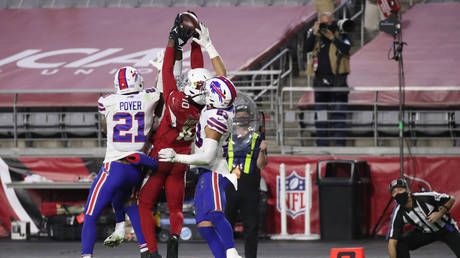